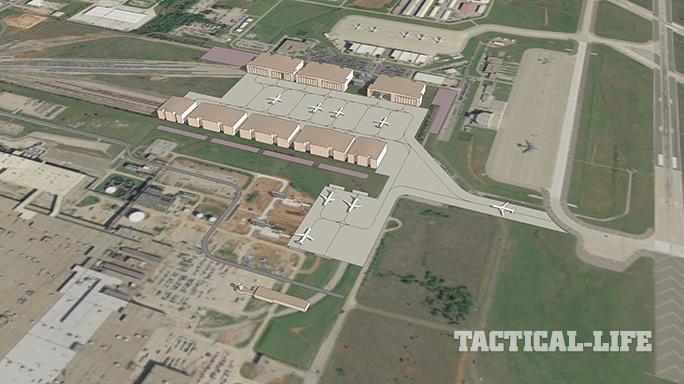 An artist’s rendering of the future KC-46A Pegasus Maintenance Campus to be built at Tinker Air Force Base, Okla. On Feb. 3, 2015, the Air Force acquired the land for the campus.
(Photo by U.S. Air Force illustration)
Comment(s)

The following is a release from Tinker Air Force Base:

Tinker Air Force Base officials announced Feb. 2, the acquisition of 158 acres of land on the southwest side of the base to stand up a depot maintenance facility for the Air Force’s next-generation aerial refueling aircraft, the KC-46A Pegasus.

The land purchase was made possible through a joint effort of the U.S. Air Force ($8 million), the City of Oklahoma City ($23.5 million) and Oklahoma County ($12.5 million).

The land was formerly owned by the Burlington Northern Santa Fe Railway Co., where it operated a rail yard that primarily served the former General Motors manufacturing facility.

Prior to selecting the 158-acre property as the location for its KC-46A depot operations, the Air Force evaluated a number of potential sites both on and near Tinker AFB. After extensive review, the service determined that this property would be the best value for the taxpayer and would also increase the base’s security by incorporating land between disconnected portions of the base, connecting all of the base’s property.

“The property adjacent to Tinker Air Force Base is not only the best value for our taxpayers, but it also places KC-46A operations in one centralized location on the base, making it easier for them to provide the airpower our nation relies on,” said Kathleen Ferguson, the principal deputy assistant secretary of the Air Force for Installations, Environment and Energy. “Our air refueling fleet is critical to our ability to reach any corner of the globe quickly, and Tinker plays a vital role in that mission.”

“Our Air Force’s global mission is underpinned by our ability to air refuel when and where needed,” Litchfield said. “For more than 50 years the KC-135 Stratotanker has supported our Air Force mission across the world. Since this Eisenhower-era aircraft was introduced into the fleet, Tinker has been home to KC-135 sustainment and maintenance. The modernized KC-46 replacement tanker will support Global Reach, Power and Vigilance for generations to come.

“For Tinker, it’s safe to say that supporting the KC-46 represents the bedrock for the next 50 years,” the general added. “Acquisition of the current rail yard property allows the development of a highly effective and efficient maintenance and repair operation that will save the taxpayers hundreds of millions of dollars over the life of the system. This is a win-win for our nation, Air Force, taxpayers and local community. We are grateful for all the support and visionary leadership engaged to make this happen.”

Tinker officials stressed that the acquisition would not be possible without the continued support of the installation’s community partners.

The City of Oklahoma City and Oklahoma County provided a combined $36 million to enable the acquisition. The 1,321 new jobs created through this project will be enrolled in the Oklahoma Quality Jobs program. Legislation passed last year will allow those incentive payments to go back to the city and county on a prorated basis to reimburse their investment in this job-producing infrastructure.

Gov. Mary Fallin heralded the project as a prime example of how Oklahoma works together for economic development and for the support of our nation.
“Tinker has such a critical role in supporting our military,” Fallin said. “Oklahomans recognize the importance of the base and the workforce at Tinker to our economy. I applaud everyone involved for their perseverance in bringing this complicated project to fruition.”

Oklahoma City Mayor Mick Cornett agreed.
“This work exemplifies how our community’s support of this base is unequaled in our nation,” Cornett said. “Time and again over the past 60 years we have shown unwavering support of the missions – and the men and women who perform them — on this base. Each time we make these investments in Tinker, the base and the community are stronger.”

In addition to the land acquisition, the county and Air Force also made a final transfer of ownership of the former General Motors facility. An Oklahoma County bond issue passed in 2008 secured the use of the facility for the Air Force.
“We really see the acquisition of this rail yard as a sequel to our work in acquiring the GM plant,” explained Brian Maughan, the chairman of the Oklahoma County Commissioners. “Our promise to the voters in 2008 was to expand employment, improve worker conditions on base and create a more effective manufacturing operation for the Air Force. This project absolutely continues that effort.”

Members of Oklahoma’s congressional delegation congratulated the community on its cooperative effort and the investment in our nation’s security.

“Investing in Tinker Air Force Base is an investment in Oklahoma’s future,” said U.S. Sen. James Inhofe. “The purchase of the GM plant in 2008 and the BNSF rail yard today provides for our national security and ensures that Tinker Air Force Base remains a premier installation of the United States military. I am very proud of Oklahoma — its people and the local government and business leaders — as well as the Tinker community for its dedication to our nation and its security, which made this acquisition possible.”
Earl Sears, and Sen. Mike Mazzei who led the passage of legislation last year that modified the Oklahoma Quality Jobs Act and helped to support Oklahoma military installations’ investments in job creation, land acquisition and infrastructure development.”

“It’s an honor to be part of a community that stands behind the mission of Tinker Air Force Base and the entire Air Force,” Lanford said. “Not only is this collaborative project a step forward for the next generation of air refueling, it’s good for our local economy. The people of Oklahoma have always supported our men and women in uniform and their families. We are proud to ensure that our nation’s heroes have the resources they need to defend the Constitution of the United States against all enemies, foreign and domestic.”

Congressman Tom Cole also shared his support.
“I am very pleased that the U.S. Air Force has acquired the 158 acre BNSF rail yard property for the KC-46A sustainment program,” he said. “Because of Oklahoma’s steadfast commitment to acquiring this property, the single campus environment will translate into cost savings and efficiencies while supporting 1,321 jobs at Tinker Air Force Base.”

The 158 acres was acquired from the Burlington Northern Santa Fe Railway Company.

“BNSF Railway is pleased by the agreement’s successful outcome,” said Julie Piggott, the executive vice president and chief financial officer, BNSF Railway. “We are glad that we were able to facilitate a project that supports Oklahoma job creation and economic development, while also supporting the readiness of our nation’s Air Force.”

Construction on the property is scheduled to begin later this year with the first KC-46A arriving at Tinker AFB in 2018. During construction, an estimated workforce of 350 people will be required for the construction of the maintenance facilities.

The new KC-46A depot maintenance operation will be part of the Oklahoma City Air Logistics Complex. Brig. Gen. Gene Kirkland, OC-ALC commander, cited the impact this acquisition will have on operations at Tinker AFB.

“This property will enable us to host all KC-46A depot operations within a single campus environment,” Kirkland said. “This will allow us to grow depot support of the new tanker fleet while continuing to fully support maintenance on the KC-135 until it is phased out.”

The KC-46A campus will eventually support an estimated workforce of 1,321 maintenance personnel. 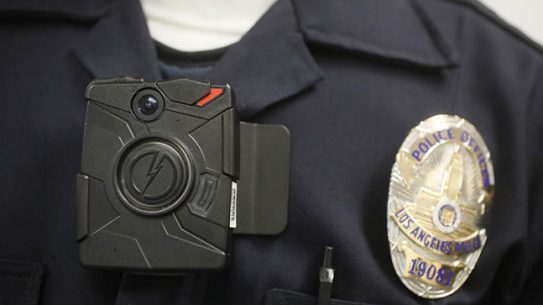 LAPD officials tell public that availability of body camera footage will be open to...