LAPD SWAT officers have to be prepared for all scenarios, so when they were called upon to take out a home invasion suspect from a helicopter during a tense six-hour standoff last week, they got the job done. It marked the first time the LAPD SWAT team had opened fire from a helicopter hovering over a scene, the department announced.

According to the Los Angeles Times, it all began on Monday morning at around 9 a.m. when a woman woke up to an intruder inside her Sunland-Tujunga house. She managed to escape through a bedroom window and call the police, informing them that there were multiple guns in the home.

Officers arrived at the scene and—after looking through a window—determined that the suspect had armed himself with one of the firearms inside the residence. That’s when a SWAT team was called in.

SWAT officers surrounded the house and used a bullhorn to try to get the intruder to surrender, but he wouldn’t budge.

The option for taking a shot at the suspect from the ground didn’t present itself, due to the fact that the house was at the top of a hill surrounded by brush and debris, LAPD Charlie Beck said. Thus, the decision was made to bring in SWAT officers trained to fire from a helicopter.

Police shot tear gas into the house to flush the bad guy out. When he emerged outside at around 2:45 p.m., he opened fire.

“The suspect definitely had high ground at all of the ground officers, was firing indiscriminately at them — and actually fired at the helicopter, we believe,” Beck said.

The LAPD SWAT officers fired back at the suspect from the helicopter. The suspect was shot, and his body rolled down a ravine, where he was pronounced dead. He has since been identified as 29-year-old Anthony Soderberg.

Neither the woman who fled from her home nor the officers involved sustained any injuries during the incident.

An investigation into the incident is now underway, as is standard procedure for any LAPD officer-involved shooting. The case will be reviewed by the DA’s office, the Police Commission and the LAPD inspector general.

Beck told the LAPD’s Board of Police Commissioners that department officials were within reason when they put SWAT officers inside the helicopter.

“It requires very specific criteria that have to be met regarding terrain, regarding weather, regarding the threat to the community, regarding the other options that have been utilized,” Beck said. “It appears that those criteria were met. Obviously there will be further review of this to ensure that.”

Geoffrey Alpert, a professor with the USC’s Department of Criminology and Criminal Justice who is an expert in police use of force, says engaging a suspect from the air can be advantageous, because officers are afforded a “a bird’s-eye view instead of a worm’s-eye view” of the situation.

“It’s an option most departments shouldn’t use because they’re not well-trained in it,” Alpert said. “But LAPD, one of their specialties is tactical shooting.” 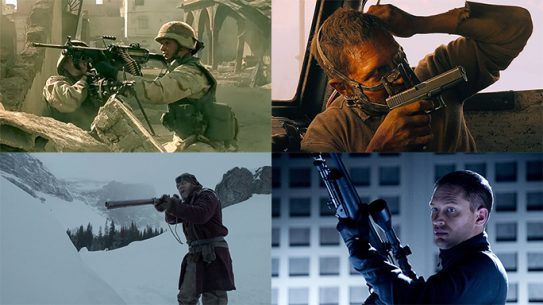 From ‘Black Hawk Down’ to Bane: 11 Guns Used by Actor Tom Hardy

Throughout his impressive career, pro-gun actor Tom Hardy has used one of the largest...