Niantic, Connecticut – The United States F-Class Rifle Team today announced that Lapua, a division of the Nordic Nammo Group, has committed to provide world class cartridge cases for use in the team’s quest for the gold in the 2009 World F-Class Long Range Rifle Championships.

In July 2009, 35 of America’s best F-Class shooters from across the United States will travel to England to face team competition at distances of 600 to 1000 yards in the third World F-Class Long Range Rifle Championships. The United States won the first world championships in 2002 held in Ottawa, followed by a second place finish in 2005 in South Africa.

In an effort to reclaim the world champion title in 2009, the team officers have created a training program designed to greatly increase their odds. “We have worked hard to modify both our team selection process and training regimen,” said Robert Bock, United States F-Class Rifle Team captain. “It brings us great pride and pleasure to have our efforts both acknowledged and supported by Lapua. We can’t thank Lapua enough for its support and dedication or our future success.”

F-Class is shot from the prone position at distances of 300 to 1,000 yards. Competitors may use almost any caliber rifle, a scope, and both front and rear rests. An ideal sport for both male and female competitive shooters, this shooting discipline is unique in the fact that anyone can excel in it, even with little experience.

“F-Class shooting is performed with a scoped, rested rifle,” said Adam Braverman, U.S. sales and business manager for Lapua. “Men, women, teenagers, the elderly and the physically disabled are able to compete on an even playing field, making F-Class the fastest growing long-range shooting discipline in the world. It is our pleasure to support the national team and we look forward to them returning to the United States as World Champions.”

As a part of the Nordic Nammo Group, Lapua specializes in small caliber cartridges and components for civilian and professional use and are the choice of the world’s top shooters. For additional information about Lapua, visit www.lapua.com. 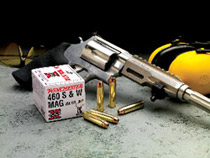