A Las Vegas Police officer fired four rounds at an armed man engaged in a physical struggle with a woman outside a gas station last week, fatally wounding him. Watch the dramatic body cam footage of the shooting above.

According to the Las Vegas Sun, the incident unfolded when a citizen called 911 at 5:34 p.m. on Tuesday to report a man—who appeared to be armed—choking his wife in front of a gas station convenience store. The body cam footage starts as the unidentified officer steps out of his vehicle.

“What’s going on?” the officer yells as he sees the suspect—later identified as 41-year-old Phillip Pitts—holding his wife at gunpoint. “What’s that in your hand? Drop the gun!”

The officer then tells the wife, who is screaming throughout the entire ordeal, to get away from Pitts.

Pitts ignores the officer. During a press conference after the fact, Clark County Assistant Sheriff Tom Roberts said Pitts pointed the gun at his head and threatened to shoot himself, while his wife pleaded with him not to pull the trigger.

The officer—who takes cover at various points behind his vehicle as well as another civilian vehicle—repeatedly tells Pitts to put the gun down and get down on the ground, to no avail.

At about one minute and 43 seconds into the video, Officer David Nesheiwat, 33, arrives on the scene. When he sees Pitts press his gun into his wife’s stomach, he opened fire, shooting Pitts twice, the Sun says. Pitts goes down, but he’s still holding the gun and pointing it at his wife, which prompts Nesheiwat to fire at Pitts two more times, killing him.

After the shooting stops, Pitts’ wife stumbles over to a curb, sits down and says, “”I’m hit … I got hit!”

One of the bullets went through Pitts’ arm and into the woman’s stomach. She was transported to a nearby hospital where she underwent surgery. She’s expected to survive. Roberts said the couple’s 10-year-old daughter had tried to keep Pitts away from her mother before police got there, but she isn’t visible in the body cam footage.

An investigation revealed that Pitts didn’t have any priors in Las Vegas, but he did have multiple misdemeanor arrests in Hawaii, with his last being in 2007.

Nesheiwat, an 11-year veteran of the Las Vegas Police Department, has been placed on administrative leave, per standard procedure.

During the press conference, Roberts discussed the decision-making process that leads an officer to discharge his weapon, stating that his LEOs are trained to assess the danger a suspect poses to themselves and bystanders.

“The intent is to save lives, not take lives … and trying to neutralize the threat as best as you can,” he said. 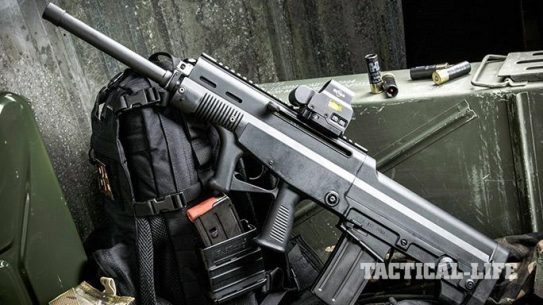