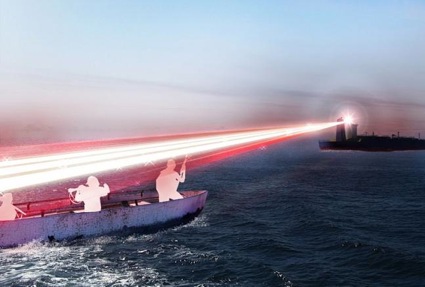 he war against pirates could be about to get more even with the development of a new anti-pirate laser that temporarily blinds attackers.

BAE Sytems has developed the laser system that it says would prevent pirates from being able to aim their weapons at targeted at oil tankers and container ships in the waters.

The global defence and security company says the beam could be housed on moving ships and is capable of providing a visual warning to pirates at distances greater than 2km. At lesser distances, the beam disorientates attackers so that weapons cannot be targeted effectively.

The United Nations does not allow weapons designed to cause permanent blindness and although the laser can temporarily blind pirates, it does not damage the eye in any way from any distance.

“The effect is similar to when a fighter pilot attacks from the direction of the sun. The glare from the laser is intense enough to make it impossible to aim weapons like AK47s or RPGs, but doesn’t have a permanent effect,” said Roy Evans, BAE Systems capability technology lead for laser photonic systems.

However, BAE added that further safety tests must be carried out before the system can be put on the market.

BAE said that when fitted on commercial ships the laser distraction system could utilise its own targeting capability or integrate with existing ship radar and sensor systems to control the direction and power of the beam, while having security features so that it could not be used by pirates if they boarded the ship.

The shipping industry has been plagued by pirate attacks in recent years who have threatened trade routes in the Indian Ocean.

The International Chamber Of Commerce’s International Maritime Bureau (IMB) said there were 430 pirate attacks worldwide reported in 2010, up from 406 in 2009.

Last month we reported that the area pirates operate in was expanding from off the Somalian coast, where pirates from the region aare responsible for almost half of the attacks according to the IMB.