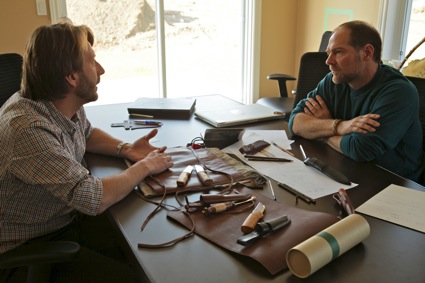 Helle, an 80 year old knife producing factory in Holmedal, Norway, is proud to announce that Les Stroud – musician, filmmaker and outdoor enthusiast, best known in Norway for the hit Discovery Channel series “Survivorman” – is the newest designer to join the historic Helle team.

Les Stroud has a unique history with Helle knives. As a youth, while trekking the rugged Temagami Canadian wilderness, he found a knife lost on the forest floor. Unknown to Stroud at the time, it was a Helle knife. It would prove to be the best knife Stroud would ever use – easy to sharpen with a grip that fit perfectly in his hand. Stroud would use it for years until one day, sadly, the wilderness claimed it back.

Years later, Helle became interested in Stroud as Survivorman, attracted to his philosophies, his values, and way of thinking. Helle approached Stroud to design a new knife – a knife that could be used by true outdoor enthusiasts seeking the real thing: the natural way of life. When Stroud told the story from Temagami and realized the knife he found in the forest was actually a Helle knife, a rare opportunity for partnership was forged. Helle is proud to present the new knife designed by Les Stroud and produced by the dedicated and highly skilled craftsmen at Helle in Holmedal. Forged from the fires of integrity and an unwillingness to compromise beliefs, Les Stroud has given this new knife its name…and of course, it is called The Temagami.

Report: Virginia Tech too slow to spread word about shooter.

Helle, an 80 year old knife producing factory in Holmedal, Norway, is proud to…