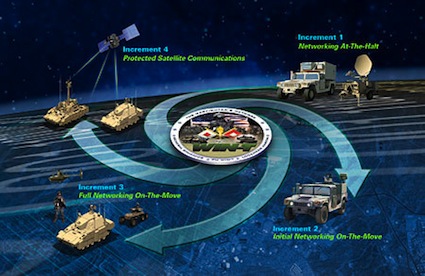 Under this contract, Lockheed Martin will deliver transmission subsystem radios, modems, antennas and mast systems which will be integrated into a variety of combat vehicle platforms. The transmission subsystem provides the foundation for the WIN-T network’s data transfer capability over a highly dispersed, non-contiguous area. Integrating SATCOM, line-of-sight and terrestrial waveforms, this “self healing” network provides high-bandwidth, on-the-move connectivity which dynamically switches between terrestrial and satellite waveforms, depending on the terrain. For example, if a commander is moving, and the terrestrial link quality begins to deteriorate, the system automatically connects to SATCOM. As a result, brigade combat teams maneuvering across wide geographic areas can be linked with commanders and the Global Information Grid through an on-the-move broadband networking capability.

The next iteration, WIN-T Increment 3, introduces an airborne network node to the WIN-T system as well as increased network reliability and capacity; smaller and more tightly integrated communications and networking gear for users. General Dynamics is teamed with Lockheed Martin, BAE Systems, Harris Corporation and L-3 Communications on the WIN-T team.

Additional equipment is being produced for the U.S. Army’s on-the-move, high-capacity communications network that…