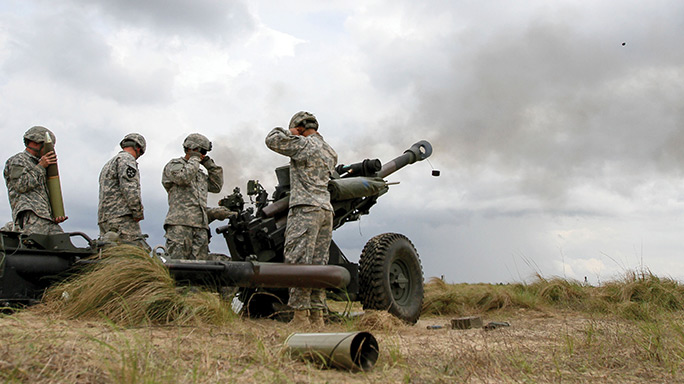 The following is a release from Maj. Wade Perdue, PEO Ammunition:

More than two decades have passed since the first M119 howitzer rolled off the production line at Rock Island Arsenal – Joint Manufacturing and Technology Center, or RIA-JMTC, yet it remains one of the Army’s primary direct and indirect fire support assets.

This lightweight, air-mobile, towed howitzer has been the workhorse for the Army’s infantry brigade combat teams’ direct support artillery battalions.

Throughout the past 13 years, it has seen extensive use in both Operations Enduring Freedom and Iraqi Freedom, or OEF and OIF. The Army has employed this howitzer in some of the most austere conditions in the world, firing multiple-round, high-angle, high-charge missions on a daily basis in support of combat troops.

High-angle fire is used for firing into or out of deep defilade such as that found in heavily wooded, mountainous and urban areas. It is also used to fire over high-terrain features near friendly troops.

To counteract the effects of these high operational-tempo combat conditions and to increase the survivability of the howitzer, the Project Manager for Towed Artillery Systems, or PM TAS, which manages the M119A3 howitzer within the Program Executive Office for Ammunition, or PEO Ammo, has developed an ongoing system modernization program.

Through this program, the howitzer has received several significant upgrades that improve performance, maintainability and safety. The most recent upgrades incorporated into the current configuration include digital fire control; increased low temperature capability, from -25 to -51 degrees Fahrenheit; and the M20 breech.

PM TAS has now shifted its attention to upgrading the howitzer’s legacy recoil system, which in the past has been plagued with reliability and maintainability issues. PM TAS is working with the U.S. Army Armament Research, Development and Engineering Center, or ARDEC, and RIA-JMTC on a program to enhance reliability and maintainability and reduce current manufacturing complexity, which in turn results in an overall reduced module cost.

Although the M119 has proven to be one of the most reliable and responsive fire support assets over the past two decades, its Achilles’ heel has been the legacy recoil system. Field reports from OEF and OIF, relayed through formal systems and in anecdotal reports, have exposed shortfalls with the legacy system that negatively affect performance as well as sustainment costs.

Shortfalls of the legacy system include reliability issues in the form of frequent seal leakage from both the recuperator and buffer, resulting in increased maintenance time. Additionally, the variable recoil linkage, which sets the recoil length based on the elevation of the gun, is prone to breaking and binding. Both modules are rigidly mounted, allowing little or no movement, which causes binding and premature wear of the metal parts and seals within the buffer and recuperator.

As the operational artillery community drives the requirements for a higher-performing, more reliable recoil system, the sustainment side drives requirements for overall system cost. The legacy recoil system is very complex and includes a lot of moving parts. This complexity means constant maintenance and adjustment during normal and combat operations, resulting in high replacement rates.

Supplying spares to keep up with the high demand can be difficult because of the complexity of manufacturing the required parts. Additionally, the assembly process requires specialized tooling, increasing costs and leading to problems with availability.

The M119 howitzer’s recoil system consists of a recoil brake (a damping system) and a hydropneumatic recuperator (a gas spring system). A recoil system’s main function is to absorb and control the rearward movement of the cannon and return it to its original firing position, thus avoiding violent shock to, or movement of, the carriage.

The buffer, the damping aspect of the system, absorbs the reaction forces of the firing howitzer and brings it to a controlled rest within a determined length along the sleigh, the part of the carriage that provides immediate support for the howitzer tube and houses the recoil system. The recuperator, precharged with gas, uses the rearward movement of the cannon to increase its gas pressure, creating the energy to return the cannon to its original firing position.

The redesigned system modifies and simplifies some of the components, but operates on the same fundamentals as the legacy system. The new design modifies the buffer by splitting the front head of the legacy buffer into two pieces, compensating for potential misalignment within the system and internal recoil length. The redesigned recuperator is a modified version of the legacy version with a majority of the components removed.

This is possible because of the Suspension Lockout System, or SLOS, and fixing the recoil length at 25 inches. The SLOS is an easily installable, field-deployable device used to stabilize the M119 during high-angle firing. It removes the problematic variable-recoil hardware, and works in conjunction with the fixed recoil system to reduce accelerations and stresses on the carriage and lower buffer rod forces.

In the legacy recoil system, recoil length varied from 14.5 inches to 42 inches depending on the elevation of the gun. The combination provides more stability by reducing platform displacement, resulting in more responsive fires and making it safer for the Soldier to operate.

When redesigning a system as complex as the M119 recoil system, the challenge is to improve reliability, availability and performance to meet threshold requirements while controlling the overall cost. In addition to increasing reliability and stability and eliminating the frequent need to add or remove oil, the recoil redesign also reduces the overall weight of the system by approximately 45 pounds, a significant weight reduction.

Using a combination of unmodified and modified legacy parts along with the newly manufactured ones reduced overall costs. The legacy system consists of approximately 124 total parts. The redesign will reduce that number by 40 percent to approximately 75, reusing 47 parts from the legacy system – 65 percent – and manufacturing 28 new parts. The redesign efforts will reduce the estimated cost of the recoil system from $60,000 to $40,000.

Although the number of parts has been reduced, the system is as functional as but more reliable than the legacy system and meets all the threshold requirements. Incorporating the SLOS and the M20 breech with the recoil redesign maintains functionality. As with any artillery weapon system, excessive movement during firing adversely affects performance, with the problem being most pronounced at high-charge zone, high-angle firings.

The Code F modules from TACOM and PM TAS were sent to RIA-JMTC, which handled teardown and inspection. RIA-JMTC, along with ARDEC engineers, oversaw reworking of legacy parts and manufacture of new parts from the technical data package, and RIA-JMTC assembled the recoil modules. Then strength-of-design testing began. The prototyping effort at RIA-JMTC gave the PM TAS-ARDEC team the opportunity to work directly with manufacturing experts at RIA-JMTC, who provided valuable feedback on the technical data, highlighting design changes that increased manufacturability as well as cost savings.

The original acquisition strategy was to decide if, after the completion of the prototyping effort, commercial industry or RIA-JMTC would produce the new system. However, as coordination for the make-buy decision proceeded, it became apparent during the prototyping that the best value for the Army, taking into account cost, schedule, performance and risk, was to have the M119A3 recoil redesign production effort performed by RIA-JMTC.

During the prototyping, PM TAS, the program manager, ARDEC and RIA-JMTC developed a partnership approach that leveraged each group’s strengths. The ARDEC engineers provided technical and engineering support, while RIA-JMTC provided manufacturing process support and valuable feedback on the technical data package. This relationship, along with constant, open and candid communications, is the underlying reason the prototyping effort was so successful.

RIA-JMTC has all the critical tooling and machining needed to manufacture new parts and rework any reused legacy parts. The hydraulic clean room, where the teardown and assembly of the recoil modules is accomplished, features state-of-the-art tools and fixtures. For the manufacturing portion, RIA-JMTC’s in-house test facilities cut testing expenses by more than half. Program discussions indicated that the estimated cost for industry to perform the testing would have been $43.7 million; RIA-JMTC was able to execute testing for $20.7 million.

In addition to providing a more reliable and less maintenance-intensive howitzer, the recoil redesign project is an example of expanding the operational capabilities of the field artillery while maintaining cost. The largest portion of savings for the recoil redesign program is gained from reusing and modifying 65 percent of the legacy system parts, making an existing system better at a fraction of the cost.

Even in the current resource-constrained environment now facing the Army, the need for modernization does not stop. The future challenge will be to keep up with this high demand for modernization with limited resources. By maintaining strong relationships with the combat development community and the organic industrial base, which have proven that they can produce a high-quality product on time and within budget, PM TAS has set the conditions to meet future modernization needs for light field artillery. 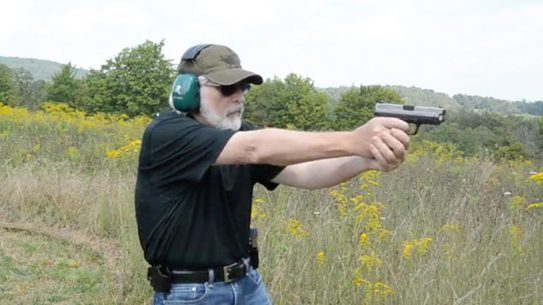 Featuring a 4-inch barrel, the cutting-edge Mod.2 4” Service Model is a double-stack 9mm...