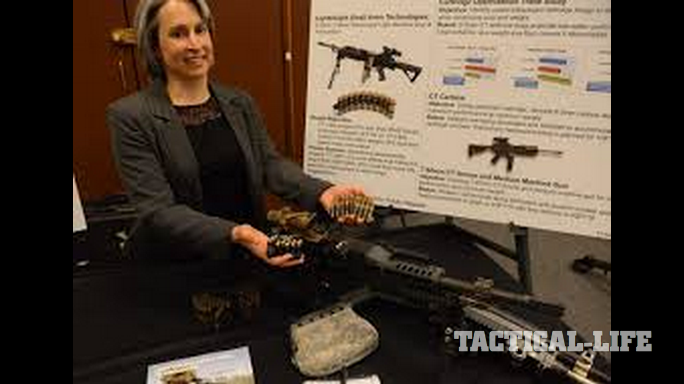 PICATINNY ARSENAL, N.J. (Army News Service, May 6, 2015) — When engineers here looked at the heavy, 17.5-pound M249 carried by Soldiers, they decided to put it on a diet and rearrange some of the components, Kori Phillips said.

She said when her team was finished, the M249, formerly known as the Squad Automatic Weapon, went from 17.5 to 9.2 pounds. That is only about 2 pounds heavier than the M16A2 rifle.

Phillips, who spoke during media day here, May 4, is a project engineer with the Joint Service Small Arms Program.

No new exotic metals were used to lighten it, she said, just machining components down in size. As for rearrangements, the biggest was detaching the firing chamber from the barrel.

The new, external firing chamber has the added benefit of keeping the gun cooler and reducing the likelihood of rounds cooking off in the chamber, Phillips said.

As for the rounds, program engineers designed new ones that are cased in a plastic-like substance, replacing the brass cartridges. This, she said, has resulted in a 39-percent reduction of ammo weight.

The CT LMG was test-fired by Soldiers on Fort Benning, Georgia, in September 2011, she said. Those and subsequent tests showed the CT LMG to achieve 25 percent more first-round target hits than the heavier model M249 now in use.

The Soldiers liked it so much, some of the squad leaders said they wanted every Soldier in their squad to have one, she said.

They cannot though, she said, because it is still considered in development until long-term testing determines how well it stands up over time, and, of course it would have to become a program of record. Another round of testing begins this fall. No other timetable was given.

CT LMG was not the only new developmental weapon on display for media day. Dozens of other systems were too, including a 40mm grenade, which Soldiers can launch from their rifle-mounted grenade launchers.

This is nothing like your grandfather or even father’s M433 grenade, fielded in the early 1970s, however.

Autonomous means Soldiers do not have to do anything different than they do now when they fire grenades except to ensure it is the new autonomous one, he said.

The smart fuse, he said, senses when the grenade is going over a wall and when it does, it air bursts, presumably taking out adversaries hiding behind the wall.

Asked whether it could do the same to an enemy hiding behind a tree, Gilbert said yes, it senses that as well and would burst just as it passes the tree trunk.

Asked what sort of sensor the grenade contains that differentiates clutter from triggering obstacles, Gilbert said that is highly classified.

The new grenade, which does not have a name yet, can also point detonate up to 400 meters like an ordinary M433. If the sensor doesn’t detect a valid obstacle, it simply explodes on impact.

Testing in February showed an airburst reliability of 76 percent. Gilbert did not have a timeline beyond that, as it is not a program of record and is incubating in development.

It is hard to stay on track at Picatinny since trees grow between its 1903 Carnegie Steel rails over which ammo trains once rolled during the two world wars. Trucks do the job now.

But scientists and engineers still need to stay on track in the development process, and that can be a problem when the main thing they understand is physics and materials, said Andrea Stevens, Armament Research, Development and Engineering Center’s manager for innovation, who keeps their projects from derailing.

There is a lot more than lab work needed to keep a development on track, she said. For example, there is an entire process for getting patents approved – and Picatinny produces more patents each year than any other Army installation. Also, there is the matter of latching on to a funding stream because without that, a project lacks enough steam to move down the track.

And, she said, there are a lot of other things a project might need help on such as modeling. It is one thing to see how a part looks in a CAD drawing and it is another to actually hold the part in your hand.

Today, ordinary people can buy 3-D printers to do that in plastic, she said. Picatinny has those.

Picatinny also has a 3-D printer that can print out various types of flexible plastics and even printed circuit cards used in computers and electronics. That really speeds the development cycle, she said.

The arsenal also houses a 3-D printer that prints in various types of metals so that the prototyped part produced also accurately represents the feel, strength and heft of the one being developed.

Ralph Tillinghast, lab director for the Collaboration Innovation Lab, has that state-of-the art printer that produces 3-D metal objects in many shapes and sizes and even can do very intricate, thread-like details.

The lab’s printer does it with lasers, he said. It shoots out a layer of metal and then builds another layer on top of that. Each new layer is welded onto the existing layer by the laser. It can do most metal including steel, stainless steel and even cobalt and titanium.

It does not do so well with aluminum, however, which is considered a soft metal, he said.

Tillinghast said his lab also uses machines parts. He showed a large, heavy bronze part that goes inside an M2A2 aiming circle, which may have been manufactured during World War II and is still in use today for aiming mortars and artillery, sort of like a compass.

He then showed an aluminum part in the exact shape as the bronze one that could be used in its place. Of course, the aluminum was much lighter.

Asked about its strength, he said the aluminum one was actually stronger than the bronze one because it contained strengthening alloys similar to those used in high-performance aircraft parts.

Whatever the engineers need, Stevens and Tillinghast help them and their projects stay on the modernization track. 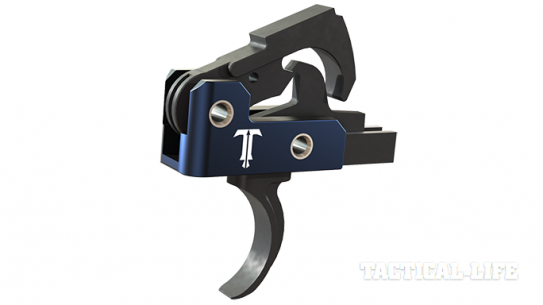 The all new AR-15 Frictionless Trigger from TriggerTech features a free-floating roller that eliminates...