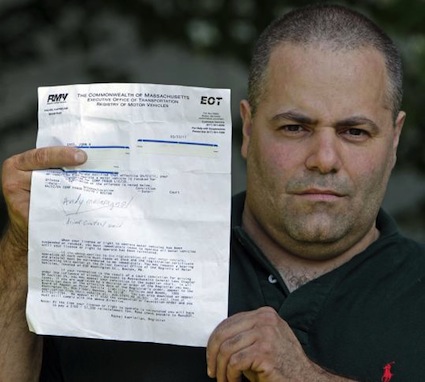 John H. Gass hadn’t had a traffic ticket in years, so the Natick resident was surprised this spring when he received a letter from the Massachusetts Registry of Motor Vehicles informing him to cease driving because his license had been revoked.

“I was shocked,’’ Gass said in a recent interview. “As far as I was concerned, I had done nothing wrong.’’

After frantic calls and a hearing with Registry officials, Gass learned the problem: An antiterrorism computerized facial recognition system that scans a database of millions of state driver’s license images had picked his as a possible fraud.

It turned out Gass was flagged because he looks like another driver, not because his image was being used to create a fake identity. His driving privileges were returned but, he alleges in a lawsuit, only after 10 days of bureaucratic wrangling to prove he is who he says he is.

The Registry revoked John H. Gass’s license after a computer system identified him as…