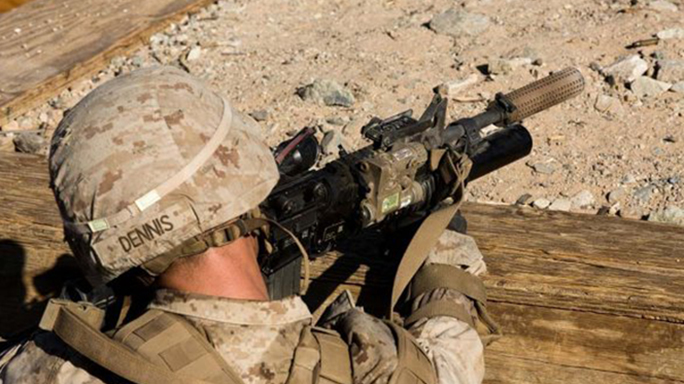 Photo by Sarah N. Petrock, 2d MARDIV Combat Camera
A U.S. Marine with Bravo Company, 1st Battalion, 2nd Marine Regiment utilizes a suppressor while providing security on a company attack range in Twentynine Palms, Calif., Oct. 21, 2016. The Marines of B. Co are the first in the Marines Corps to use the suppressors, demonstrating the capabilities on platoon and company attack ranges during Integrated Training Exercise (ITX) 1-17, in preparation for a Special Purpose Marine Air-Ground Task Force deployment.
Comment(s)

The U.S. Marine Corps is testing the combat effectiveness of suppressors by having an entire infantry battalion use them on all their weapons.

As Popular Mechanics notes, gunshots aren’t the most pleasant thing to listen to. In fact, they can be downright painful, depending on the caliber and the distance from gun to listener. For example, a M4 carbine, M249 light machine gun, or M240 medium machine gun produce between 159 to 164 decibels of noise, according to a CDC report.

Now imagine that level of noise in a combat situation, with multiple guns blazing and one squad leader trying to issue orders.

As the first step in addressing this issue, Bravo Company, 1st Battalion, 2nd Marines has started a training exercise involving the use suppressors on all their weapons, from M4 rifles to .50 caliber machine guns, at Marine Corps Air-Ground Combat Center Twentynine Palms.

The results have been encouraging.

“What we’ve found so far is it revolutionizes the way we fight,” Maj. Gen. John Love, commanding general of 2nd Marine Division, told Military.com. “It used to be a squad would be dispersed out over maybe 100 yards, so the squad leader couldn’t really communicate with the members at the far end because of all the noise of the weapons. Now they can actually just communicate, and be able to command and control and effectively direct those fires.”

“It increases their ability to command and control, to coordinate with each other,” Wade said. “They shoot better, because they can focus more, and they get more discipline with their fire.”

More data on the use of suppressors will be gathered over the next year-and-a-half, Wade confirmed. 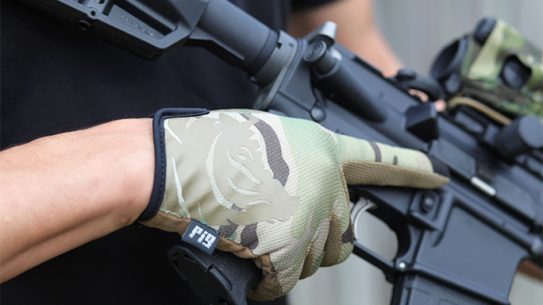 Whether you're on or off the range, SKD Tactical's PIG FDT Delta Utility Glove...