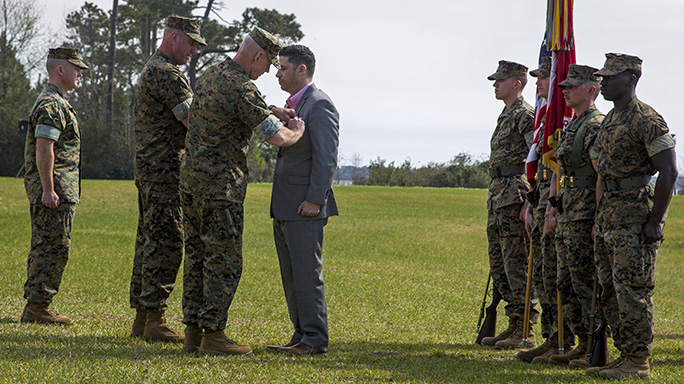 Maj. Gen. Brian Beaudreault, commanding general of 2nd Marine Division, pins a Silver Star Medal on Sgt. Matthew Parker (ret.) at Marine Corps Base Camp Lejeune, North Carolina, March 18, 2016. Parker was awarded the Silver Star for his courageous actions during Operation Enduring Freedom in 2011, where he assumed control of his platoon during a firefight after several leaders had been injured.
Comment(s)

The following is a release from Sgt. Kirstin Merrimarahajara, II Marine Expeditionary Force:

The Silver Star is the third highest military combat decoration and was awarded to Parker for his bravery and composure during an attack in Afghanistan on May 21, 2011, while he was deployed as a rifleman with 3rd Battalion, 2nd Marine Regiment during Operation Enduring Freedom. Parker courageously assumed control as the ground force commander after several leaders had been injured, called in fire support and evacuated casualties.

The award was presented by Maj. Gen. Brian Beaudreault, commanding general of 2nd Marine Division, who expressed his appreciation for what Parker did that day.

“You represented everything we want to teach in honor, courage, commitment and the warrior’s ethos … and for that I’m greatly indebted to you,” Beaudreault said. “You did everything we would want and hope for every Marine NCO leading a formation to do.”

Beaudreault said that much of the success of that day was due to Parker being able to apply his training when he needed to most.

Parker was not the only one to step up that day. Parker noted that several lance corporals took charge of higher positions, including his own, while he led the platoon.

“They led their Marines the way they were supposed to,” Parker said, directed at the junior Marines who were in formation for the ceremony. “I just want you to know I appreciate you. I didn’t do anything special; I just did what I was supposed to do and I’m lucky that I had good Marines who were backing me up.”

Parker enlisted in the Marine Corps in 2002 and was deployed in support of both Operation Enduring Freedom and Operation Iraqi Freedom. In 2013, he deployed with the 26th Marine Expeditionary Unit.

Sergeant Parker was medically retired in 2015. His personal decorations include the Navy and Marine Corps Achievement Medal, Combat Action Ribbon with one Gold Star, and Good Conduct Medal with two Bronze Stars. 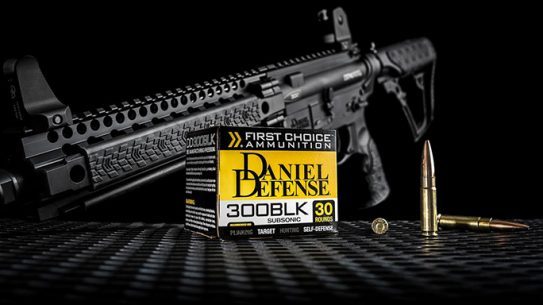 The all new Daniel Defense First Choice 300 AAC Blackout ammunition is made using...