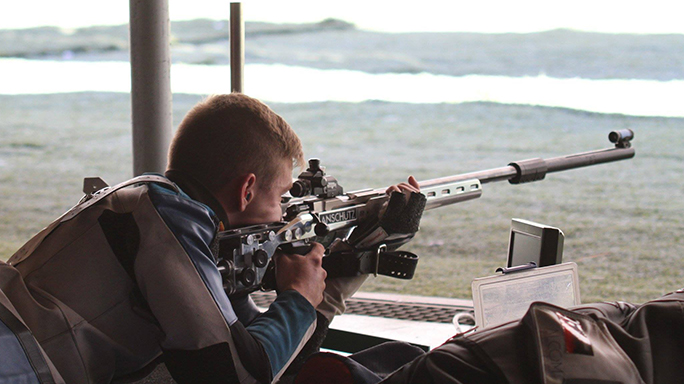 Second Lieutenant David Higgins shoots his rifle in the World Championships in Granada, Spain, in September 2014. Higgins attended the United States Air Force Academy, and then decided to cross-commission into the United States Marine Corps. Higgins has qualified for the Olympics this year, and will be going to Rio to represent Team USA as well as the U.S. Marine Corps on the rifle shooting team.
(Photo by Marines; Courtesy photo)
Comment(s)

To earn the title ‘Marine Officer,’ you must excel in leadership, academics and physical training. For one newly commissioned Marine Corps officer, not only did he achieve his goal of earning the title Marine, he has also qualified to compete for the United States during the 2016 Summer Olympics.

Second Lieutenant David Higgins, a 21-year-old San Clemente, Calif., native, began shooting rifle at the age of 13. Once he graduated high school, he was nominated to attend the Air Force Academy, where he was presented the opportunity to shoot rifle competitively. Prior to graduation from the academy, Higgins made the decision to cross commission into the United States Marine Corps.

“My dad is a Marine, so I grew up in the Marine culture,” said Higgins. “Not only did I want to follow in his footsteps, but I also wanted to lead Marines and was more interested in the ground-based aspect of the Marine Corps.”

In April of 2016, Higgins qualified to represent Team USA in men’s 50-meter prone rifle shooting. He will compete in the Olympics in Rio de Janeiro this August.“This is a great way to start my Marine Corps career – on a world stage,” said Higgins.

Higgins said the Marine Corps and the Olympics are both a good fit for him because he loves competing.

“Going to the Olympics gives me the chance to compete at the highest level in the world,” Higgins said.

When Higgins returns from the Olympic Games, he will continue his career by attending The Basic School, to train and prepare for duty as a company grade officer in the operating forces.

To support and follow Higgins through his Olympic experience, visit TeamUSA.org.

The article above is a release from Cpl. Logan Block, Marine Corps Recruiting Command

The all-new Bark-9 carrier from Protech Tactical not only protects the canine in the...