Fifteen Marines and one Navy Corpsman are dead after a KC-130T aircraft crashed into a soybean field about 85 miles north of Jackson, Miss. on Monday. The exact cause of the crash is currently unknown.

According to a statement put out by the Marine Corps, the Marine plane originated from Marine Corps Air Station Cherry Point, N.C. and was transporting personnel and equipment—including “various small arms ammunition and personal weapons”—from there to Naval Air Field El Centro, Calif. when it disappeared from air traffic control radar.

Alan Hammons, an official at Greenwood Airport, told WNCN that the Marine plane suffered a “structural failure” at 20,000 feet. The plane spiraled into the field at around 4 p.m., with debris reportedly scattered in a nearly five mile radius.

Authorities described a massive fire as a result of jet fuel in the middle of the field. Firefighters used unmanned devices to control the flames. Multiple “high-intensity explosions” were also seen, in addition to plumes of black smoke visible for miles, Fox News said.

Andy Jones, who works on a farm nearby, said he heard a loud boom and looked up to see a plane “spinning” downward with one engine smoking.

“You looked up and you saw the plane twirling around,” he said. “It was spinning down.”

The Marine plane, Jones said, crashed behind trees in the soybean field. By the time he and others reached the crash site, the wreckage was engulfed in fire and smoke, making it too dangerous to approach. The plane was essentially flattened by the force of impact, Jones said.

“Beans are about waist-high, and there wasn’t much sticking out above the beans,” he said. “It was one of the worst fires you can imagine.”

The Marine Corps said it is withholding the identities of the dead until their families can be notified.

According to Naval Air Systems Command, the Lockheed KC-130T is a “multi-role, multi-mission tactical tanker/transport aircraft, which provides air-to-air refueling as well as rapid ground refueling and tactical transportation and delivery of personnel and cargo.” 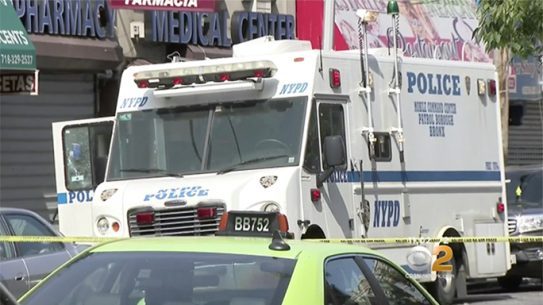 All NYPD mobile command vehicles will be given bullet-resistant door panels and window inserts...