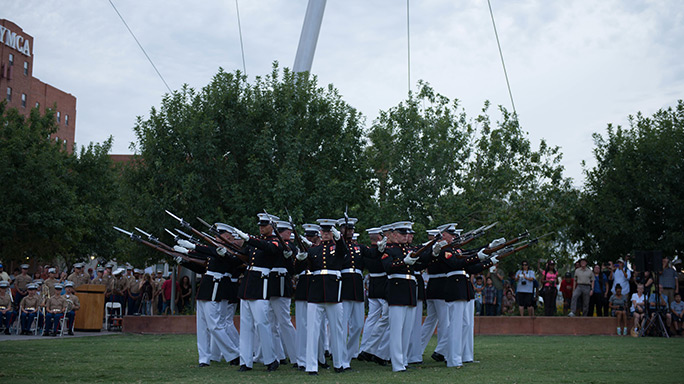 The United States Marine Corps Silent Drill Platoon preforms a series of rifle maneuvers at Civic Space Park, Phoenix, Sept. 9, 2015, as part of the opening ceremony for Marine Week Phoenix. Marine Week Phoenix allows the local community to see the Marine Corps in a way that they would not normally be able to experience.
(Photo by Sgt. Cuong Le)
Comment(s)

The following is a release from Sgt. Cuong Le, Defense Media Activity:

The Marines began the ceremony with a performance conducted by Marine Band San Diego followed by a presentation of the colors by a mounted color guard.

“This week we salute all our Marines, young and old as well as all who have served this great nation,” said Greg Stanton, the Mayor of Phoenix. “I am very honored to be able to help kick off Marine Week Phoenix.”

The event continued with a performance from the United States Marine Corps Silent Drill Platoon. Audience members were privileged to see the platoon perform a series of marching maneuvers along with concise rifle manual.

“It is motivating and eye opening for people to see the Marines,” said William Bastedo, an audience member from Douglas, Arizona. “This is the first time I have seen the Silent Drill Platoon in person, and the Marine band did an awesome job! All the Marines I have seen today have upheld the standards of the Marine Corps.”

After the performance finished, a Marine Corps color guard retired the colors for the day, while Marines and audience members paid their respect.

“We are proud to be here and share this week with the people of Phoenix,” said Lt. Gen. David Berger, the commanding general of I Marine Expeditionary Force. “There have been many months of planning and coordination between the greater Phoenix area and our Marine Corps team, and this hard work and support has resulted in a successful partnership that I believe will continue long after Marine Week ends.”

The opening ceremony ended with a demonstration of the Marine Corps Martial Arts Program conducted by MCMAP instructors from the Martial Arts Center of Excellence. The Marines demonstrated and explained the reason for why it is important for Marines to be disciplined physically and mentally. 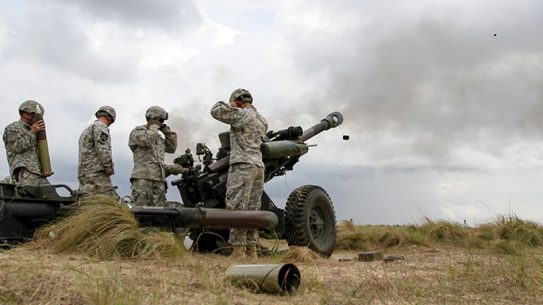 The M119 howitzer has been upgraded over the years, but still remains a major...