Marines and Philippine troops moved more than 200,000 pounds of gear ashore during Amphibious Landing Exercise 2015. The Marines used platforms that could be assembled into a small bridge. (Cpl. Drew Tech / Marine Corps)
Comment(s)

A large joint exercise between Marines and their Filipino counterparts broke new ground this year, as they completed some of the most complex amphibious training yet.

Col. John Armellino, chief of staff of the 3rd MEB told Marine Corps Times that the cooperation between the troops was stronger than ever during the exercise that took place in Subic Bay.

“I would argue that this PHIBLEX emphasized greater combined operations,” he told Marine Corps Times. “It was certainly more comprehensive, and it was definitely more complex than any PHIBLEX that we’ve done before.”

The PHIBLEX exercise required troops to move more than 200,000 pounds of supplies ashore by using an improved ribbon bridge and small boats.

While performing the exercising is important, Armellino stressed the importance of strengthening relationships between the Marine’s and their international military partners during the exercise, especially with their close Philippine partners.

According to Marine Corps Times,  Philippine marines shared some tips on how to survive in the jungle by setting traps and finding food like fish, frogs and plants. Marines also learned new hand-to-hand combat techniques from the local marines.

In total, about 4,700 people participated in PHIBLEX. Aside from the Marines, sailors and Filipino troops, members of the Japanese and Australian militaries sent observers, and personnel from other U.S. agencies participated, including the State Department, Army and Special Operations Command. 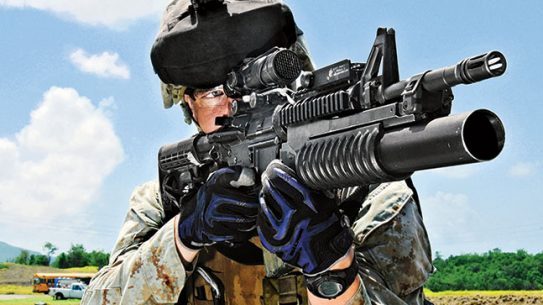 ST Kinetics' SPARCS round offers a quick recon option for troops on the front...