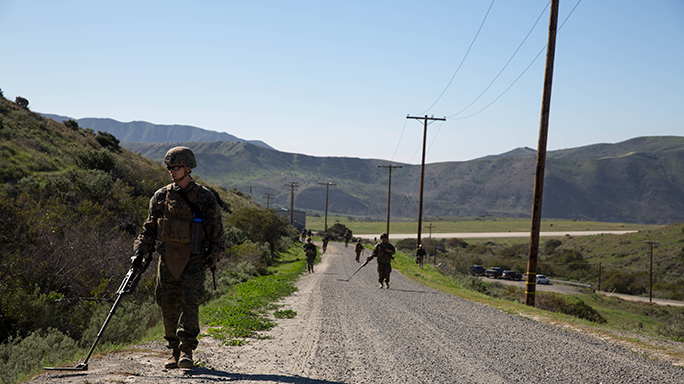 The following is a release from Cpl. Garrett White, I Marine Expeditionary Force:

Since the start of the wars in Afghanistan and Iraq, IEDs have been the primary cause of death or injury to coalition forces operating in the regions. The U.S. military has had to adapt to this ever-evolving threat and constantly seeks out new methods to counter these deadly devices.

“Alpha just came back from deployment, and the Marine Corps Engineer School asked them to test out a pilot course,” said 1st Lt. Robert Boyles, executive officer of Company A. “They’ve been through this kind of training three or four times before they even deployed, so they are out here to run through the course and give their feedback.”

The previous course curriculum consisted of nine different class segments and could take an entire day to get through one lesson plan. The new Defeat the Device Counter-IED Training Class has only six sections with a more focused curriculum and emphasis on practical application.

Boyles explained it is all the same information as the old course, distilled to the most important parts to make the training more practical and efficient. The training explains the role that different aspects of a unit play in C-IED operations and how to best exploit the various assets at a unit’s disposal.

The class – consisting mainly of small unit leaders – learned the functions, strengths and weaknesses of the tools and personnel they could integrate into their patrols and teams. While the enabling assets are helpful, the instructors emphasized the importance of pre-combat checks and pre-combat inspections as the basis for success and survivability.

“This training is designed for readiness,” said Aaron Pluff, an instructor with the Marine Corps Engineer School, Defeat the Device branch. “A Marine that doesn’t have the proper training will be set up for failure before he even steps outside of the wire.”

Additionally, focus was placed on recognizing and understanding the enemy’s tactics, techniques and procedures as much as our own.

“The goal is to go from a general awareness of IEDs, to a focused awareness to a specific combatant command,” explained Pluff. “IEDs are a worldwide threat, but that threat is a little bit different depending on what combatant command you are in, even [detailed] down to the neighborhood.”

As a former Marine rifleman and Iraq veteran, Pluff’s experiences with IEDs go beyond a technical understanding and slideshow slides. He explained that the Marine Corps did not have as much of the C-IED training or as many enablers it has today during his enlistment. His unit had to learn a lot of hard lessons in how to counter the threat IEDs pose, he said.

The Marine Corps has since recognized the threat IEDs present and has established a robust system to combat the IED threat. Since 2007, the Marine Corps Engineer School has trained more than 300,000 Marines, soldiers, sailors and coalition members in the use of C-IED tools and tactics.

“A lot of Marines I’ve stood in front of have gone out and done good things; finding IEDs and getting awarded for their actions,” said Pluff. “I think this training is going to help the individual stay alive, keep their Marines alive, and ultimately come home with all ten fingers and all ten toes.” 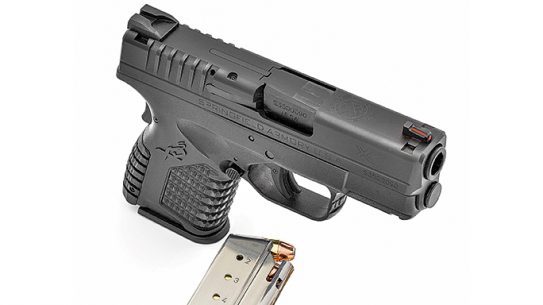 The ultimate backup carry pistol for LEOs, the all new XD-S from Springfield Armory...