As a hush went across the spectators, two Marines, tied in the finals for shooting an air rifle, lined up their final shots in a shoot-off. A tenth of a point on the last shot meant the difference between winning gold and silver for these two Marines.

These Marines were two of 13 Marines who made it to the finals and won 13 out of 24 medals — four gold medals, five silver medals and four bronze medals — during the 2013 Warrior Games shooting competition at the U.S. Olympic Training Center here yesterday.

Gunnery Sgt. Pedro Aquino, who beat teammate Cpl. Angel Gomez in a shoot-off by a tenth of a point, won the gold medal in the SH2 prone air rifle category during his first Warrior Games. The scores range from 0 to 10.9.

“We were confident we would dominate,” said Aquino, who shot a 10.7 against Gomez. “We trained hard, focused and showed discipline. I went into the finals for the SH2 prone for the air rifle and was tied with an Army competitor. We got down to the last shots, and I saw him flinch. I kept my composure and persevered.”

Gomez didn’t leave empty-handed. He took the silver in the prone and standing air rifle competitions during his fourth Warrior Games. He said he continues to compete for the thrill of the sport.

“I love shooting, just looking at those sights and shooting, the feel of the rifle,” he said. “We worked hard, and it paid off. We were determined to win those medals.” 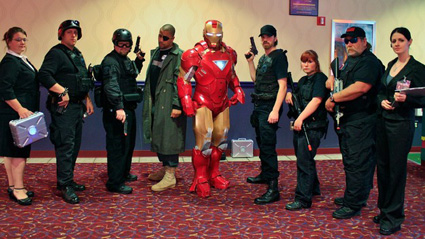 As a hush went across the spectators, two Marines, tied in the finals for…