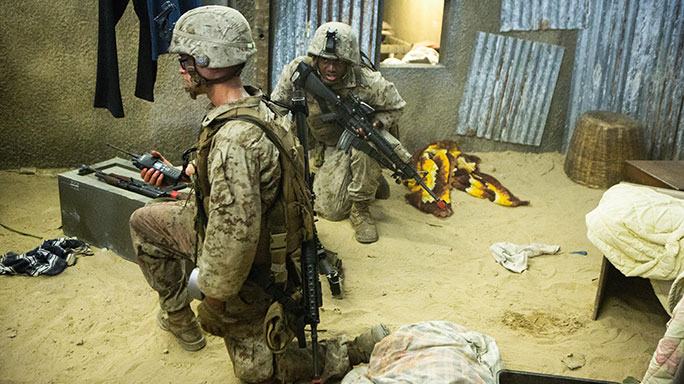 Marines with Bravo Company, 2nd Combat Engineer Battalion, communicate to the rest of their platoon that they have discovered a large weapons cache during the Infantry Immersion Trainer at Marine Corps Base Camp Lejeune, North Carolina, June 17, 2015. Marines were able to practice tactics, communication within the unit and combat readiness in a realistic training scenario, which better prepared them for a deployed environment.
(Photo by Lance Cpl. Aaron Fiala)
Comment(s)

The following is a release from Lance Cpl. Aaron Fiala, 10079, and the U.S. Marine Corps:

Marines with Company B, 2nd Combat Engineer Battalion, trained in a simulated African village where they entered and held a defensive position at the Infantry Immersion Trainer on Marine Corps Base Camp Lejeune, N.C., June 17, 2015.

The ITT is a training system that prepares Marines and sailors for deployment, using simulations to recreate a realistic urban setting that prepares them for real combat scenarios. The simulation for the event involved insurgents operating nearby and attempting to disrupt operations in the village. The civilians living there wanted the Marines to take charge of the situation but several factors induced stress on the situation.

“This training ensures that we know how to communicate with the villagers despite a language barrier,” said Lance Cpl. Steven Olivas, a combat engineer with the company. “These are all complications that we must learn to adapt to and overcome.”

Rumors began to circulate in the village of drugs, weapon caches and a high valued target nearby. Then several role players acting as insurgents opened fire, sending panic throughout the village.

“When something like this happens we need to be ready on the spot,” said Olivas. “Readiness is very important to accomplishing the mission at hand.”

In that initial firefight a civilian was injured outside of a security barrier.

“This further complicated the situation,” said Lance Cpl. Andrew Whitworth, a combat engineer with the company. “We needed to reevaluate our strategy to keep the villagers happy without neglecting the mission.”

After the gunshots stopped, the village elder contacted the Marines so they could collect the injured villager and provide medical treatment for him.

It took several minutes for the Marines to give approval to remove the barrier and rescue the injured villager. Marines later discovered that the villager had not survived.

Complications like this in training are what help these Marines learn to overcome obstacles and prevent casualties in real life.

“Before the barrier could be put back in place we started to take enemy fire,” said Olivas. “Not getting that barrier back in position hurt us because it allowed enemy forces to move back in the village and opened one of our choke points.”

The villagers were angry that the insurgents had come back in the village. They contacted the Marines occupying their village about where they had seen the enemy forces. With this information, a fire team of Marines moved in to locate the enemy and eliminate the threat.

“This required a lot of communication,” said Whitworth. “Despite the noise from the gunshots and everyone trying to figure out what is going on, we were able to successfully find and eliminate the threat in this village.”

Once the notional threat was eliminated and the training scenario stopped, the Marines reviewed how they executed the mission and where they could improve. The Marines were informed that they planned their defense barriers efficiently and took extra safety precautions when working with the role players.

“I hope that if we get deployed, the Marines here will apply the experience they received today in real life,” Olivas said. 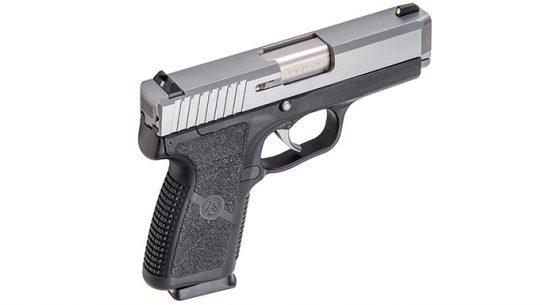