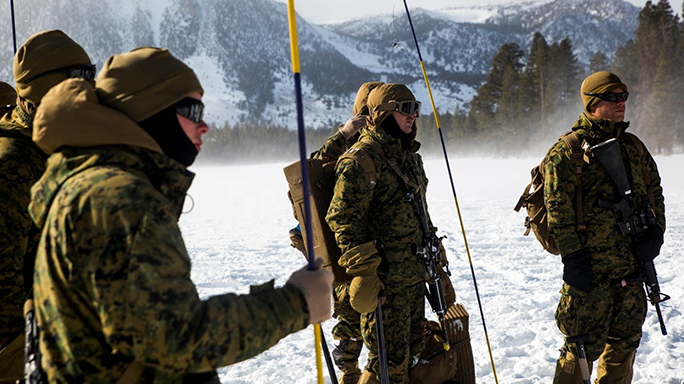 Marines listen to an avalanche probe pole class in the mountains of Bridgeport, Calif., during Mountain Exercise 1-16, a cold weather training exercise, on Jan. 13, 2016. The training is a prerequisite for a large, multi-national exercise called Cold Response 16 that will take place in Norway, March of this year. Cold Response will test 12 NATO allies’ and partners’ abilities to work together and respond in the case of a crisis.
(Photo by Sgt. Kirstin Merrimarahajara)
Comment(s)

The following is a release from Sgt. Kristin Merrimarahajara, II Marine Expeditionary Force:

Noses and cheeks are red and breath makes an appearance with every exhalation. It has been below freezing, but that doesn’t stop these II Marine Expeditionary Force Marines from being outside in the mountains and snow, preparing to participate in upcoming exercise Cold Response 16 by training at the Mountain Warfare Training Center from Jan. 11-21, 2016.

Cold Response is a joint, multi-nation exercise involving 12 NATO partners and allies. The exercise challenges their abilities to work together and grow as an organization and will take place in Norway in March of this year.

Approximately 900 Marines participated in Mountain Exercise 1-16 and trained to survive in below freezing and sometimes negative degree weather, focusing on moving, communicating and surviving.

The instructors at MWTC, also known as “red hats,” taught Marines how to traverse the mountainous terrain, how to react to an avalanche and how to melt and purify snow to use as drinking water in the wilderness, all while encouraging Marines to keep a positive mental attitude.

“We’re here to train the human factor,” said Col. Scott Leonard, Commanding Officer of MWTC. “The number one critical factor is you. You need to overcome any fear of operating in the cold. It takes a lot of personal discipline and unit discipline to survive and be successful in this type of environment.”

Snow shoes and gloves became everyday attire on the steep mountains and cold weather sleeping bags and suits were very much appreciated while spending the nights outside.

Challenges arise daily in the Marine Corps, but this environment was especially testing.

“This training is physically demanding, but more than that; it is mentally challenging,” said Sgt. Maj. Steven Brunner, Sergeant Major of MWTC.

Though the exercise was difficult at times, it allowed Marines to gain the confidence they will need to work alongside their allies in March. Cold Response will demonstrate NATO participants’ ability to unify, learn from one another and act together to respond to potential crises.

“We may all come from different countries and speak different languages…, but the biggest thing that I think we are going to take away from Cold Response is that all these militaries work hand-in-hand with each other,” said Capt. Stephen Lanpher, operations chief with Combat Logistics Battalion 252. “Together as a combined joint-task force, along with our NATO partners, the Marine Corps and the United States military can accomplish and will be successful with whatever mission we’re given.” 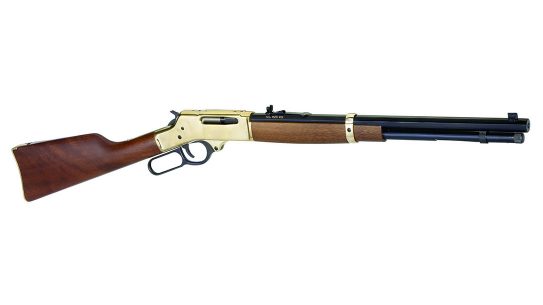 Henry 30 30: A Review of the All-American Lever-Action Rifle

Whitetail hunters and collectors alike will find it tough to pass on this USA-tough,...