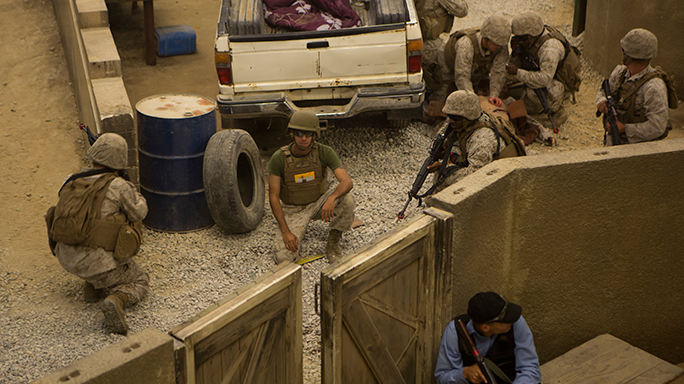 Marines with 1st Battalion, 10th Marine Regiment, take cover after rounds are fired, by enemy role-players during Infantry Immersion Training aboard Camp Lejeune, N.C., May 29, 2015. The immersion center is an indoor Military Operation on Urban Terrain environment that allows Marines to go through a life-like village and encounter role-players to better sharpen their MOUT skills.
(Photo by U.S. Marine Corps Photo by Cpl. Michael Dye/Released)
Comment(s)

The following is a release from Cpl. Michael Dye and the U.S. Marine Corps:

Marines and sailors patrolled the streets of the village while being swarmed by locals demanding the arrest of a known cartel member who is being treated at the local clinic. The patrol enters the village center when several shots are fired at them from an unknown enemy. The Marines jump into action, ready to locate, close with and destroy the enemy.

Marines and sailors with 1st Battalion, 10th Marine Regiment entered the infantry immersion training center, which is a large indoor training village, in order to provide life-like training scenarios during a training exercise aboard Marine Corps Base Camp Lejeune, North Carolina, May 30, 2015.

“Today we are working on our Military Operations on Urban Terrain skills,” said Cpl. Jacob Thompson, a field artillery cannoneer. “This isn’t something we get to do often, so we are going to work all aspects of the scenario, just in case we ever find ourselves in a scenario where we are required to conduct MOUT.”

The village the Marines patrolled had about 20 role-players, as well as several buildings to give it a life-like feel. The area was wired with several speakers that played various noises ranging from birds chirping, dogs barking and sounds of everyday life in the village.

During the scenarios an enemy role-player would start firing at the Marines causing them to react quickly.  Some of the role-players were equipped with realistic blood packs that, once activated, would pour fake blood from a wound. This added to the realism of the training.

“This is huge training for us,” Thompson said. “We have a lot of new Marines who have never experienced MOUT before.  We can sit in a classroom and discuss different scenarios all day, and we could talk about what we would do, but when we do this type of training you get to show what you would do and how you would act.”

MOUT training is a key skill in the readiness of the Marine Corps; it entails everything from fighting house-to-house and street-to-street like in Hue City in Vietnam and the Battle of Fallujah in Iraq.  MOUT requires Marines to be vigilant and always on the alert, especially in a combat situation where there are several buildings and windows for the enemy to hide in.

“This type of training is good for us to do,” said Cpl. John Webber, a field artillery fire direction controller.  “Whenever you’re training in a simulated environment, you get some good experience, however, it’s always in the back of your mind that it’s not ’real’ and it’s just training. Now we have real people yelling at us in different languages, real people who have [realistic] injuries, and [blank rounds] being fired at us, aside from being in actual combat it doesn’t get [more] realistic than this.” 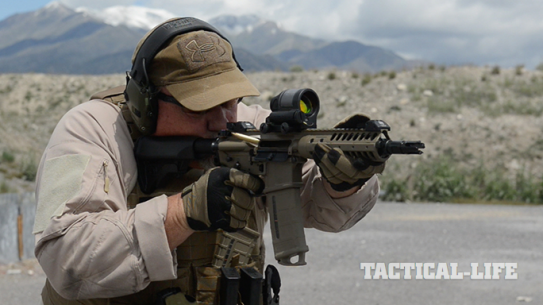