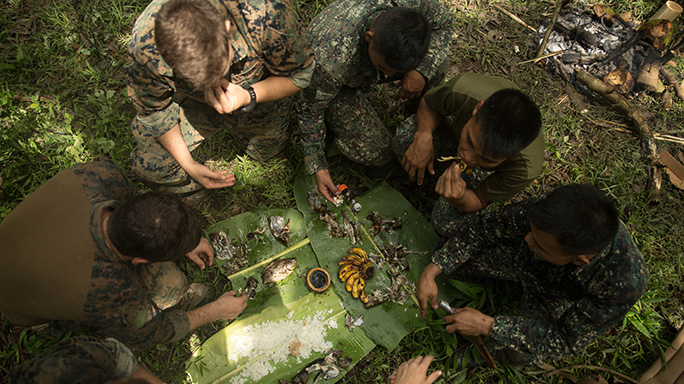 Photo by Cpl. Joey Holeman
Philippine and U.S. Marines share a meal together during jungle survival training at Ternate, Philippines, Sept. 29, 2015 as part of Amphibious Landing Exercise 2015. The Marines learned basic jungle survival skills, such as building a fire, finding sources of fresh water and catching food. The Philippine Marines taught the U.S. Marines how to use the surrounding environment to self-sustain themselves in the jungle.
Comment(s)

The following is a release from Cpl. Joey Holeman, III Marine Expeditionary Force:

Marines with III Marine Expeditionary Force are tasked to execute operations in the mountainous jungle vegetation of the Philippine island region of Luzon. Marines in the jungle can find themselves facing more adversaries than just the enemy– heat, weather and lack of food or water can be the deciding factor between living and dying.

Marines with 3rd Reconnaissance Battalion, 3rd Marine Division, III MEF, went through the Philippine Marine Corps’ Force Reconnaissance Jungle Environment Survival Training from Sept. 29-30, 2015, to learn how to increase their survivability in the jungle as part of Amphibious Landing Exercise 2015. The Philippine Marines taught U.S. Marines how to use their surrounding environment to catch food, find water and build shelter to survive.

This jungle survival training is a key part of PHIBLEX 2015, which is an annual, bilateral training exercise conducted by U.S. Marine and Navy Forces with the Armed Forces of the Philippines in order to strengthen our interoperability and working relationships across a wide range of military operations — from disaster relief, to complex expeditionary operations.

Philippine Marines with 64th Force Reconnaissance Company, Marine Special Operations Group, trained the U.S. Marines on the basics of jungle survival, giving them hands on learning experience that is important to their success in their current area of operations.

“Since our area of responsibility is mostly jungle, we have to operate in this environment,” said U.S. Marine Corps Sgt. Rafael De Hoyas, a reconnaissance man with 3rd Recon Bn. “They taught us all the skills they know- how to cook, what to eat and all the knowledge that gives us a better understanding of the area of operations we work in.”

According to Busico, Filipinos in the military who live and work in the jungle and are jungle-based operators know how to live and survive in that environment.

The Marines learned how to use bamboo to their advantage by cooking food, making fire and setting up traps and snares.

“I heard that bamboo was resourceful before coming here, but the Philippine Marines really showed us how useful it can be,” said U.S. Marine Corps Lance Cpl. Maksimilian Pavloskiy, a reconnaissance man with 3rd Recon Bn. “They showed us how to make everything with it from using it as utensils, to building a fire, to cooking rice, to even setting traps with it.”

While training with the Philippine Marines, the U.S. Marines were able to effectively learn and apply jungle survival skills that will benefit them in future operations.

“This training helps our survivability in the jungle,” said Pavloskiy, who is from Pittsburgh, Pennsylvania. “Working with the (Philippine Marines) has given us an introduction on how to use the jungle to our advantage.” 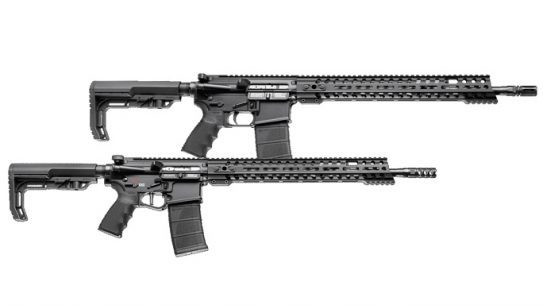