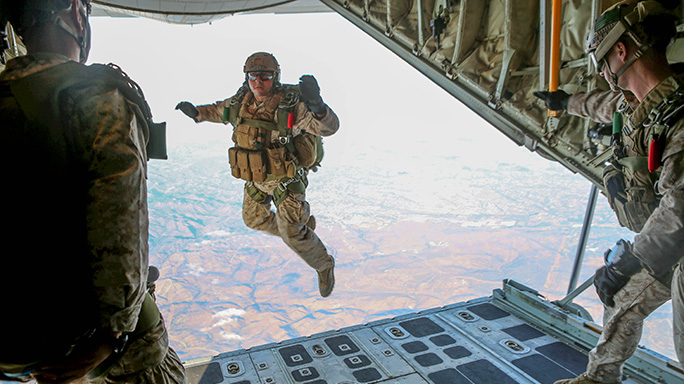 The following is a release from Cpl. Demetrius Morgan, 1st Marine Division:

1st Recon Bn’s mission is to conduct reconnaissance and surveillance in support of the division’s operations. Their mission focuses on acquiring information on the environment and enemy in areas which require human collection. Due to their extensive training, the personnel of 1st Recon are capable of conducting a wide variety of missions in any clime and place, including those which require air insert.

“This training is used so Marines are able to use parachute ops as a form of insertion into any area at any given time, including at night,” Machado said. “It’s important that we [are] able to insert from the air because one, we are able to insert into remote locations that vehicles can’t necessarily get to, Two, we can access a location without our presence being known to the enemy.”

Some Marines, like Staff Sgt. Thomas Johnston, a squad leader with 1st Recon, have accumulated plenty of experience so that jumping is second nature.

“I have been on over 50 jumps in the four and a half years that I’ve been with recon,” Johnston said. “We do these jumps so much it’s not as intimidating after a while. That’s the whole point of having these guys jump a number of times. It’s so Marines get past that.”

Due to the dangerous nature of their jobs, safety is vital. All the Marines’ and Sailors’ parachutes and gear are inspected twice by their peers and jump masters prior to boarding the aircraft to ensure everything is fully functional. An additional inspection is conducted while in the aircraft just prior to jumping from the aircraft.

According to Machado, all aspects of the parachute training – to include the self-inspections – are evaluated.

“Part of the evaluation process was them inspecting their own gear before a jump master does,” he said. “Them being able to inspect their own gear and determine whether it works saves a lot of time during real operations.”

Machado also stated the Marines and Sailors were evaluated on pre-jump drills, jump procedures inside the aircraft and their ability to land together as a group.

After completing the physically demanding three-week course and earning their Parachutist Badge, Marines and Sailors are required to continue a strict training regimen to remain in a jump-capable status. Personnel participating in parachute training are required to follow a set of guidelines to ensure they achieve specific training goals while remaining safe. Four times a year Marines must conduct jumps to not only to keep their qualification up to date but to maintain proficiency in preparation for any future operations.

During this exercise, members of the battalion faced multiple challenges to include the difficulty of carrying a combat load and jumping in low-light conditions. Cpl. Kurtis Campbell, a jump team point man with 1st Recon Bn., and the rest of his fellow jumpers had to adjust to the nature of uncertainty in each situation.

“We faced slight weather deficiencies with the wind and cloud height being low,” Campbell said. “We were still able to execute the jumps planned for the day despite that. We had a day of successful jumps and it was really good training.”

The continuous parachute training conducted by the battalion is meant to keep each individual Marine and Sailors’ jumping skills at peak performance, allowing them to accomplish their missions and also mentor and teach less experienced service members.

“Being able to get this type of training is just making me that much better as a Marine,” Campbell said. “I can take this experience with me to other units and teach guys what I’ve learned. Even if we aren’t going to jump, I can teach guys the inspection stuff that I know, how to pack a parachute and hand signals.”

The Marines of 1st Recon Bn., remain ready to provide reconnaissance and surveillance in support of the 1st Marine Division wherever they may be needed. Using special insertion methods such as airborne jumps keeps the Marines and Sailors on the forefront of our nation’s defense allowing America’s Marines to have eyes on their enemies at all times. 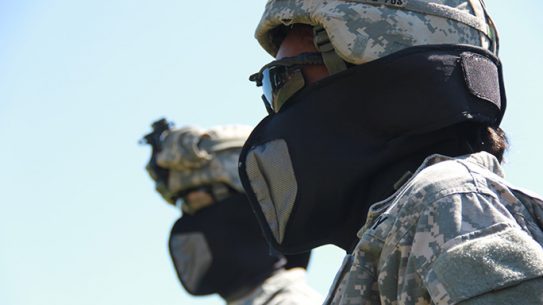 The US Army's new respiratory mask protects against chemical agents like tear gas and...