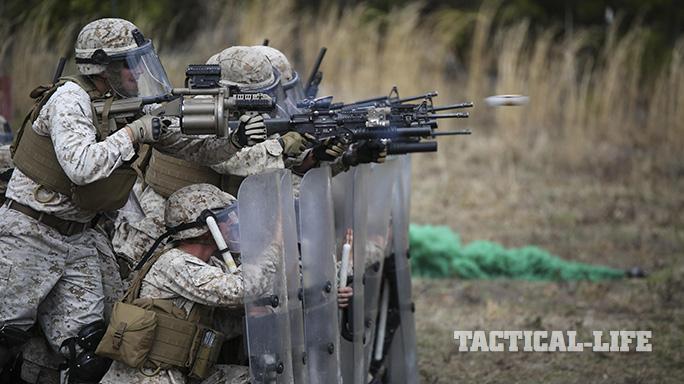 The following is a release from Cpl. Kaitlyn Klein and the U.S. Marine Corps:

The sun is beating down on a large, open field of grass and tangled weeds. Short, deafening blasts cut through the sounds of M203 and M32 grenade launchers firing. Marines charge towards enemy forces behind a moving wall of transparent riot shields, guarding themselves from blue-body practice grenades that are flying towards them.

Expeditionary Operations Training Group Marines with II Marine Expeditionary Force train unit after unit, preparing them for future deployments. For two weeks, Marines undergo a variety of training at Marine Corps Base Camp Lejeune, North Carolina, where they learn to use weapons such as the M203 and M32 grenade launchers, flash-bang grenades, oleoresin capsicum spray, stun guns, and foam batons.

“If there comes the time for a mission during deployment, such as dealing with a riot or closing an embassy, these Marines will be able to use weapons that are not lethal, but are also effective in the mission,” Dyer said.

A group of approximately 70 Marines with Battery and Golf Co., 2nd Battalion, 6th Marines, fired off their grenade launchers at dummy targets with 40mm sponge grenades and threw flash-bang grenades before gearing up for their next mission of the day.

They donned plastic masks and shields, white plastic batons, as well as flak jackets and leg protectors, before gathering together in formation against mock rioters.

Lance Cpl. Robert Wood, a rifleman with 2/6, said that he found EOTG’s training helpful for future operations during the unit’s upcoming deployment to the Mediterranean with the 26th Marine Expeditionary Unit.

“The training we do here can help us should we ever be confronted with a situation such as clearing rioters or other people out of an area,” said Wood. “We are learning a lot, and we’re getting ready to do our best on deployment.”

Dyer discussed the skills he thought were best taken away from the Marine’s training during their two-week training exercise at Camp Lejeune.

During their training, the Marines learned the five steps of mechanical advantage control holds, and applied them during exposure to oleoresin capsicum spray, and as basic defensive techniques when faced with their simulated enemies.

“Using the MACH techniques that the Marines learn here, as well as the riot control techniques we teach, are much different from the typical patrol. You have to work in unison, moving together in step with the shields and firing the weapons,” said Dyer.

He also said that he had confidence in his unit’s mission to train these Marines, through his observation of them working together, and sharing his knowledge with them throughout the weeks.

“The Marines here are doing really well,” Dyer said. “At first, it’s difficult for an infantry unit to come here and get used to moving in close formations with the shields, but they’re learning quickly.”

Dyer will continue to ready Marines with non-lethal capabilities during his time with EOTG, providing the sort of knowledge that can prevent unnecessary deadly encounters overseas, and a confident group of Marines that will readily handle any situation thrown at them. 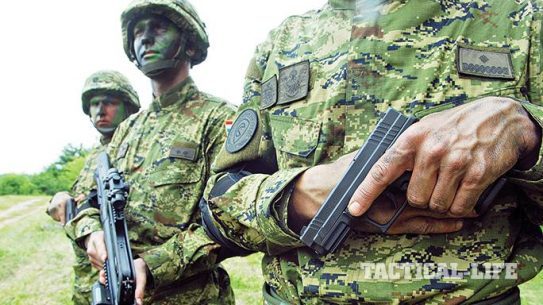 In 2001, HS Produkt and Springfield Armory entered into a long-term agreement to market...