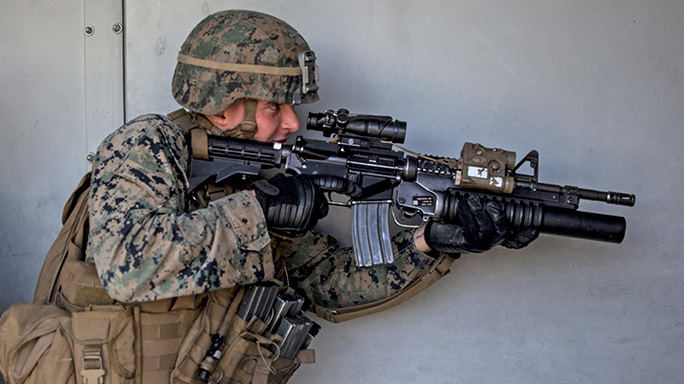 Lance Cpl. Parker Chase gets into position as the point man in his fire team during combat marksmanship training at Marine Corps Base Camp Pendleton March 2, 2016. The training was part of the Urban Leaders Course taught by 1st Marine Division Schools. The course focuses on enhancing small unit leadership through integrated training and implementation of fire teams and squad-sized elements in an urban setting. Chase is a rifleman with 2nd Battalion, 5th Marine Regiment, 1st Mar. Div., and a Harwich, Massachusetts native.
(Photo by Sgt. Emmanuel Ramos)
Comment(s)

The following is a release from Sgt. Emmanuel Ramos, I Marine Expeditionary Force:

Small unit leaders in the infantry are called upon to carry out orders and make decisions on the battlefield, and at times making the seemingly impossible possible. This is because of the rigorous training in their craft and the development of their leadership skills. It’s that dedication that has been a hallmark of the Marine’s ethos since the Corps’ inception.

Ensuring the next generation of professional warfighters continues to maintain the standard of excellence, which has been established for more than 240 years, is a never ending mission for every Marine.

The course focuses on enhancing small unit leadership through integrated training and implementation of fire teams, and squad-sized elements, in an urban setting. Because of its close quarters, and numerous hiding positions an urban setting is one of the most dangerous areas Marines operate in. Here, Marines’ physical and mental endurance is pushed to the limits.

“Obviously we do have [simunition] training, but the more realistic aspect of having live-fire training is something that really helps [students] out.”

The Marines are divided into two squads, each comprised of Marines with various infantry and non-infantry military occupational specialties. During the three-week course, Marines are expected to fill every role of a fire team.

This allows Marines to get a better appreciation and understanding of how the team’s success depends on everyone doing their job.

“When these Marines go back to their units, they will be the subject matter experts on how to operate in urban terrain,” said Agundez, who is from El Centro. “The only way to ensure we are sending them back fully trained is to have them know every role, so when the time comes they know how to employ their Marines.”

During the room clearing portion of the Urban Leaders Course, Marines rehearsed different techniques that can be used to clear structures. While Marines executed their task, instructors assessed the teams with emphasis on the leader’s actions.

“A lot of Marines, they pause, they hold, and they freeze. Ultimately, that’s something that is really bad because in this type of environment in the real world anything can be thrown at you,” said Agundez. “When you commit to a house, or a building, whatever the situation is, you have to go full-on knowing that it’s not about just me; it’s about the Marines to the left and right of me.”

To make sure the lessons were learned from mistakes made, Marines were penalized by having to conduct a casualty evacuation. This meant having to firemans carry the casualty more than 300 yards; a task that left everyone in the squad gasping for air.

“It was one of the more challenging aspects of the course, but it worked,” said Lance Cpl. Parker Chase, a rifleman with 2nd Battalion, 5th Marine Regiment, 1st Mar. Div. “I’ll remember to fix my mistakes on the next run because I don’t want to do that again.”

After a long day of rehearsals, the fruits of the students’ labor began to show, as fewer mistakes were made, and better execution was praised by instructors.

“Every unit can’t afford to send all their Marines to this course, so these Marines become a huge asset for their units because they can pass this knowledge and training on,” said Agundez.

The Urban Leaders Course begins its final days of training next week. During this time, the pressure will intensify as Marines’ understanding of military operations in urban terrain will be tested in a larger combat town. If successful, these Marines will return to their units better trained and stronger leaders. 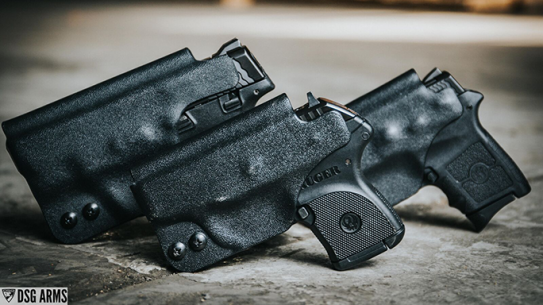