Mess with a cop, well that’s not a good idea. Mess with a couple’s date night, that’s likely equally gonna cause you trouble. But combine the two and you’ve got no chance. An armed robber found himself in that precarious position recently in Kentucky. The would-be bandit attempted to rob a Raising Cane’s Chicken Fingers in Louisville. But a married couple on a date—both of whom are also Elizabethtown Police officers—drew their weapons and stopped the Kentucky armed robbery.

Closed circuit security footage shows the suspect, identified as 30-year-old Justin Carter, pull a gun on a Raising Cane’s clerk. He allegedly demanded cash from an employee, according to kentucky.com.

That’s when a pair of officers jumped into action. Footage shows Elizabethtown Police Detective Chase McKeown and Officer Nicole McKeown ease out of the booth, with their sidearms drawn. They expertly take two different avenues of approach, with Nicole backing up Chase’s lead. The suspect immediately throws the gun down and attempts to flee.

“It was just what needed to be done,” Chase McKeown told kentucky.com.

The couple, who also met on the job, married six months ago, according to a post on the Elizabethtown Police Facebook page. The couple chased the suspect from the building, catching him and holding him at gunpoint until local Louisville Metro Police officers responded. 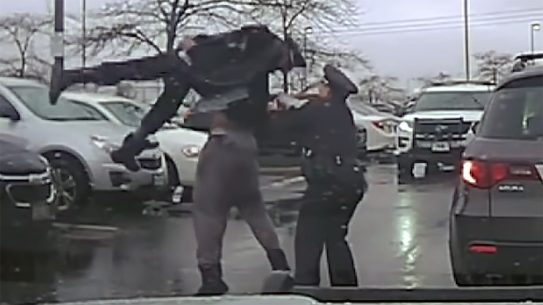