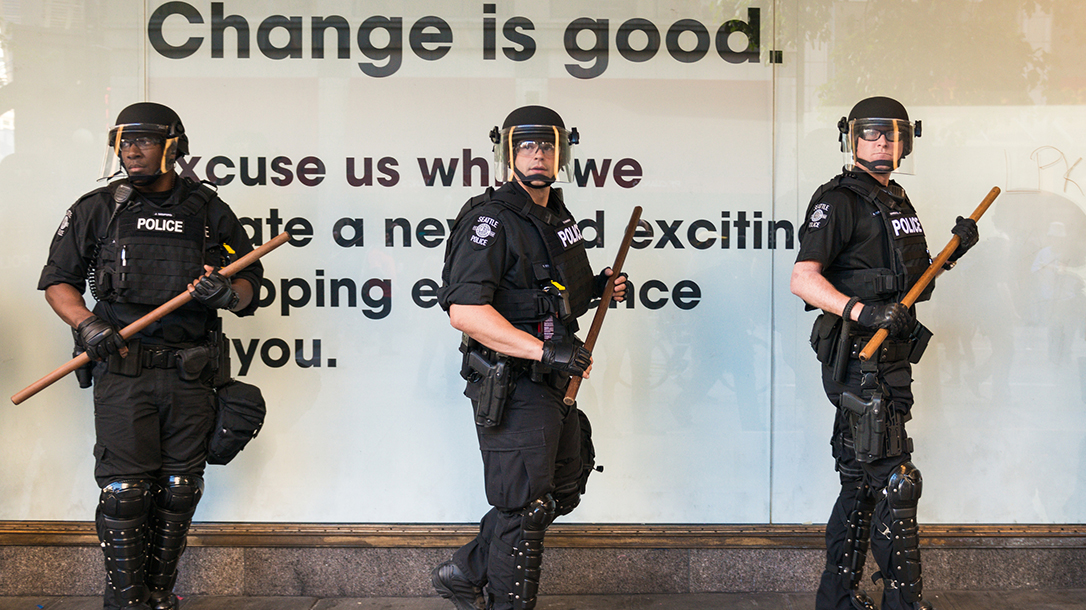 During this pandemic crisis, disturbing images stream in from other countries. They show human rights violated for the sake of health and safety. 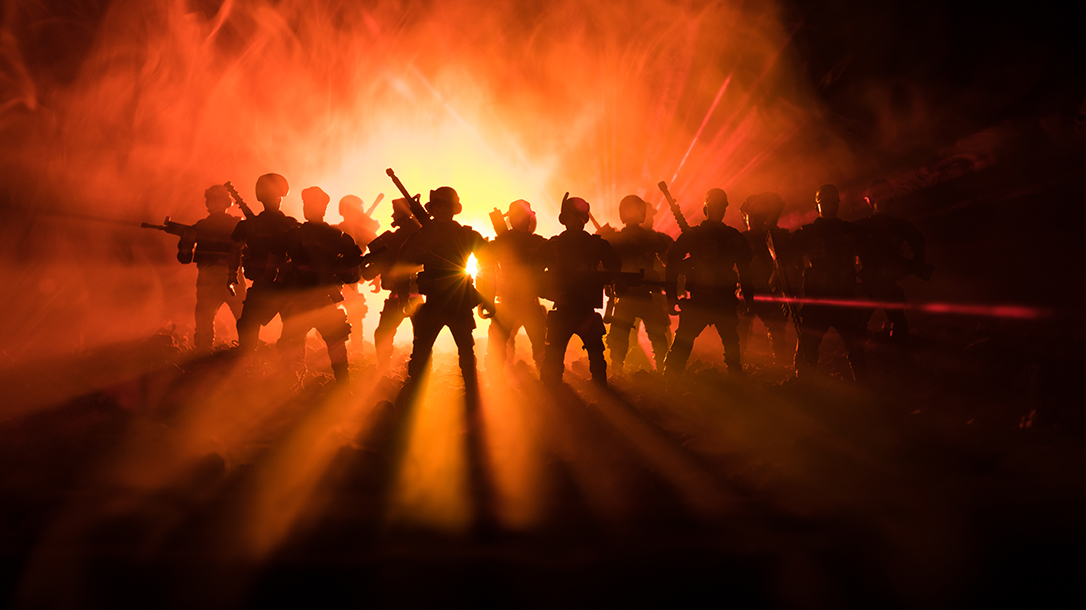 A Central America video shows people scrambling in all directions when a police truck arrives. Oddly, officers confiscate their chairs, but a man sits in handcuffs in the back of the truck, no doubt from a previous arrest. A journalist reporting about the poor conditions to COVID-19 patients in Pakistan had his legs broken. Meanwhile, a report from a Taiwan newspaper claims a woman in Wuhan saw authorities cremating living coronavirus patients. Indian Police reportedly beat citizens violating curfew and force them to do exercises. In Guatemala, church parishioners are whipped with canes as they are evacuated from a church. Philippines President Duterte announced on Thursday that those violating the quarantine could be shot on sight.

But these things can’t happen in America, right? Right? Though the government doesn’t have to shout Martial Law from the rooftops, it can quietly take away your rights in the light of these unprecedented times. And some Americans appear to be all-too willing to let it happen.

Your Rights In Danger

The Constitution limits what the government can do. Conversely, the Bill of Rights provides specific rules granted to the people and for the people. They include free speech, the right to assemble, the right to bear arms, and the rest. By design, these rights keep the government’s proboscis out of your affairs. Lately, like waves nipping at the grains of a sandcastle, those rights are beginning to erode ever so slowly, all in the name of health and safety.

In her Emergency Proclamation issued on March 11, New Orleans Mayor LaToya Cantrell leaned on Act 275 that states “… Emergency Authority is hereby empowered, if necessary, to suspend or limit the sale, dispensing, or transporting of … firearms.” Though Act 275 prohibits the seizure of firearms, it does allow “law enforcement officers to disarm someone when the officer reasonably believes it is necessary for the protection of the officer or anyone else.” That’s a fine line; a line the city crossed before during Hurricane Katrina.

The New York Times reported on Sept. 9, 2005: “Local police officers began confiscating weapons from civilians in preparation for a forced evacuation of the last holdouts still living here … Mr. [P. Edwin] Compass, the police superintendent, said that … no civilians in New Orleans will be allowed to carry pistols, shotguns, or other firearms of any kind. ‘Only law enforcement are allowed to have weapons,’ he said.”

Where does the Bill of Rights say that a person has the right to bear arms, “except in a natural disaster”? This is an example of what’s being called martial law lite. It’s not quite the full-bodied martial law you’d expect. Instead, it hints at martial law, disguised as executive orders, police safety enforcements, and health mandates.

Martial Law Lite by the Numbers

As we discussed in our post detailing martial law, it delivers an extreme form of governmental control. Martial law occurs when power transfers from civilian to military control. It typically follows on the heels of an unusual and/or catastrophic event. In the past, disasters like earthquakes and hurricanes prompted officials to declare limited martial law. However, no President nor Congress declared martial law over the entire country. And they aren’t likely to do it now. That’s not to say state governors (who hold these powers in their state constitutions) won’t. They will likely begin to make mandates and executive orders that nibble away at your personal rights. This is Martial Law lite.

On Friday, April 3, New York Gov. Andrew Cuomo Tweeted: “I am signing an Executive Order allowing the state to take ventilators and redistribute to hospitals in need. The National Guard will be mobilized to move ventilators to where they are urgently required to save lives.”

The order constitutes a noble effort to get resources where needed. But those ventilators belong to private companies. And Cuomo plans to use the U.S. military to seize them.

The Michigan Department of Health and Human Services issued an Emergency Order recently. It sets a civil fine of up to $1,000 for violating orders related to the COVID-19 outbreak.

Finally, off the coast of Malibu Beach in Southern California, police arrested a single paddle boarder. Though by himself, officials said he violated the stay-at-home order. Another solo beachgoer received a $1,000 fine for swimming in the ocean. In both cases, the arrest exposed the men to dozens more people, increasing chances of spreading the virus, via the arrest. Each scenario constitutes an example of martial law lite.

Where Can It Go From Here?

The NRA took on the mayor of Los Angles last week. The California leader ordered the closure of all gun shops in the county. Meanwhile, pot dispensaries remained open, even though both received essential status. Other cities also held emergency council meetings to decide the fate of gun businesses.

Across the pond, former Supreme Court Justice Jonathan Sumption told The National Review on Thursday: “The real problem is that when human societies lose their freedom, it’s not usually because tyrants have taken it away. It’s usually because people willingly surrender their freedom in return for protection against some external threat. And the threat is usually a real threat but usually exaggerated. That’s what I fear we are seeing now. The pressure on politicians has come from the public, they want action. They don’t pause to ask whether the action will work. They don’t ask themselves whether the cost will be worth paying.”

The economy already took a huge hit, with nearly 10 percent of the people out of work. That figure continues to rise. The government’s knee-jerk response here passed a $2 trillion stimulus package. The bailout includes loads of bailouts for corporations. Meanwhile, Congress gets a raise. Most citizens get a mere $1,200; That sum doesn’t go very far in today’s America.

But the cost Sumption talks about isn’t in dollars and cents. It harkens of freedoms and liberties and how easily Americans are giving them away.

Your Future Civil Liberties at Stake

After this is all over (and our grandchildren are left to pay for it), we should remain skeptical about the role the government plays during a crisis. There is a Keynesian economic theory called “The Ratchet Effect.” It states that once prices rise to meet a demand, they don’t return to the previous level when demand is taken away. And this can apply to politics as well.

Any powers that a government agency obtains during this pandemic will be maintained and likely expanded after the crisis has gone. The beaches and parks will close quicker. Stay-at-home mandates will be easier to pass. Your guns will be taken away at the slightest hint of crisis. To prevent such abuses of power, the government needs to drr that there is so much regulation on the books already. Speaking of regulations … 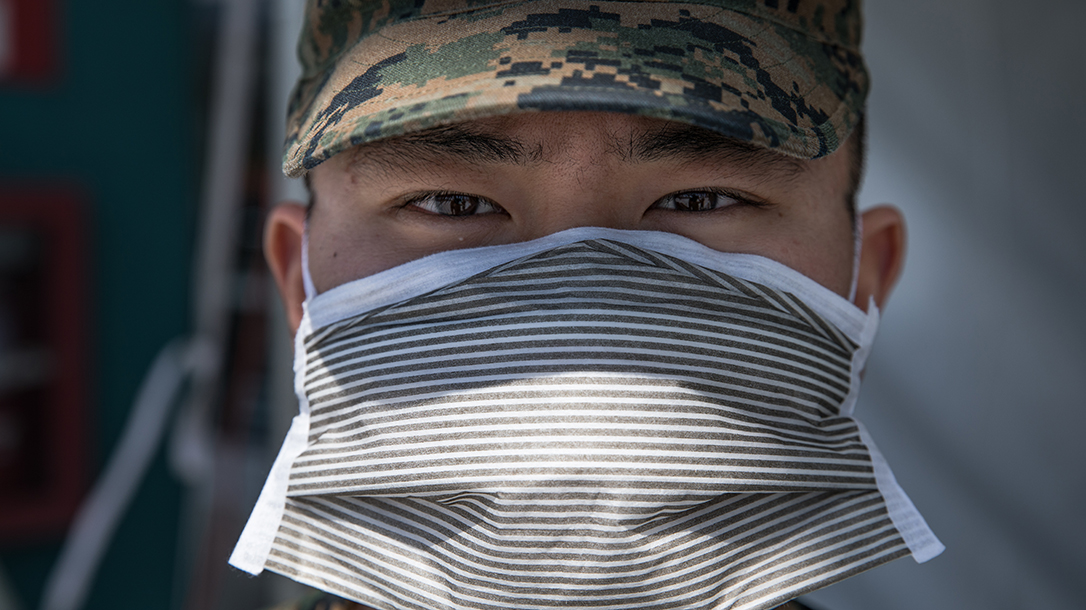 If there is such a thing, the silver lining is actually the opposite of martial law, in certain terms. It seems that most every industry has some level of regulations imposed by the government, and a lot of those are simple cash grabs in the form of license fees, permit fees, and added taxes. Officials shunted some regulatory policies to the side in the wake of the pandemic. With most states shutting down restaurants and bars, some governments have lifted the regulation about alcohol delivery and take out. Previously, regulations prevented truck drivers from driving more than eight hours in a 24-hour period. Officials killed that ban in favor of getting supplies where they needed more quickly.

In Texas, the government fast-tracked the licensing process for doctors and nurses. States, including Maryland and South Carolina, realize they don’t have enough medical professionals to handle the influx. Vice President Pence announced March 19 that healthcare providers can practice across state lines when they couldn’t before.

Even the stiff rules of the TSA have softened a little. It now allows 12-ounce bottles of hand sanitizer on planes. Of course, only 10 percent of the planes are flying these days, but the deregulation remains a nice little hole in the curtain of its security theater.

So, each time you read an article about someone being denied of their basic rights for the sake of the common “good,” that’s just a small dose of martial law. And it’s headed your way. Meanwhile, the CDC just announced you should wear a mask if you go outside. Tomorrow, you won’t be able to criticize the government or drive your car after 5 p.m. After all, it’s for your health, citizen. 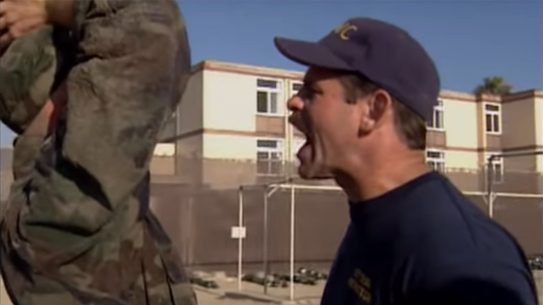 While the coronavirus pandemic consumes all news and life around us, this 'greatest hits'...