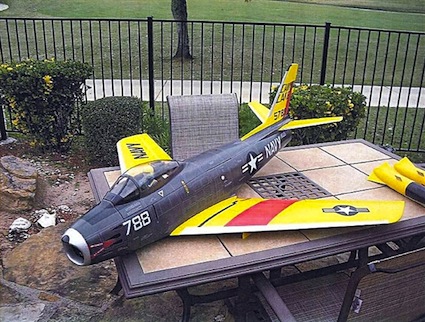 A remote-control model of a 1950s U.S. Navy Sabre jet fighter that prosecutors said belonged to Rezwan Ferdaus is seen in this undated photo released by the United States Attorney’s Office District of Massachusetts. USAMA via AFP – Getty Images

A Massachusetts man was sentenced to 17 years in prison on Thursday for a plot to attack the Pentagon and the U.S. Capitol building in Washington with explosives loaded into remote-control model airplanes.

Rezwan Ferdaus, who was arrested in September 2011 and pleaded guilty in July to terrorism-related charges in a deal with prosecutors, told the court he had devoted a lot of time to self-reflection while in jail awaiting sentencing and that he accepted his fate.

The 26-year-old was arrested after an FBI sting operation in which he requested and took delivery of plastic explosives, three grenades and six assault rifles from undercover FBI agents who he believed were members of the al-Qaida network.