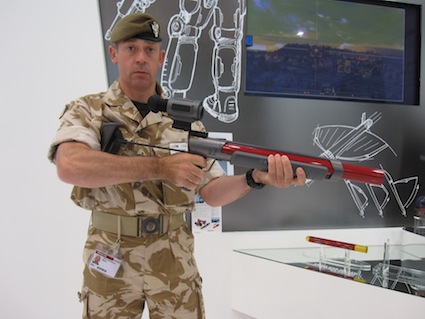 European missile maker MBDA has taken the company suggestion box and given it a new twist with a scheme encouraging workers to put forward ideas that might shape future soldier weaponry.

The result, a process the company has labeled Concept Vision, has produced ideas of what an infantry weapon system might look like in 2030 or beyond.

Around 250 MBDA employees responded with ideas in January when the company launched the drive to tap innovative skills across its European operations.

This year the search was on for future weapons for dismounted infantry operating in complex environments.

Two weapons have emerged from a selection process that has pulled together a range of ideas into an integrated solution called CVS101.

The first is Sniper, small-guided fire-and-forget 40mm ammunition that looks like a 380mm-long pencil. Weighing in at just 900 grams, Sniper can be fired from a grenade launcher-like weapon. Sniper would have a 200-gram warhead and range of up to 1.5 kilometers with pinpoint accuracy to clear rooms and stop vehicles.

The larger of the weapons, Enforcer, has a range of 2.5 kilometers in direct attack mode and weighs in at 4.5 kilogram with a 3.5-kilogram warhead.

Patents on some of the ideas are already being sought and the company has so far spent half a million pounds ($0.76 million) to get the scheme to the conceptual stage.

The CVS101 package is rounded off by a 2.5-kilo awareness and targeting sensor, a mission controller no bigger than a games console, and a viewer that doubles as a sight, data relay and targeting aid.