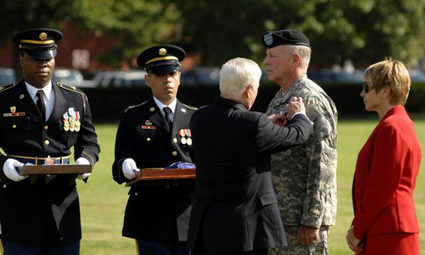 FORT MYER, Va. — The recent commander of forces in Afghanistan ended a military career today that began in 1972.

Gen. David D. McKiernan completed his last call of duty as a Soldier during a ceremony on Fort Myer’s Summerall Field hosted by Gen. George W. Casey Jr., chief of staff of the Army.

Also attending the ceremony were Secretary of Defense Robert Gates, Secretary of the Army Pete Geren, Army Vice Chief of Staff Gen. Peter W. Chiarelli, Sgt. Maj. of the Army Kenneth O. Preston and senior officials from across all branches of the military.

It began with a pre-ceremony concert from the U.S. Army Band “Pershing’s Own,” followed by the march-on of the 3rd U.S. Infantry Regiment’s Delta, Hotel and Honor Guard Companies, as well as the Fife and Drum Corps, Commander in Chiefs Guard and Continental Color Guard.

Col. David Anders, regimental commander of The Old Guard, took McKiernan on his final inspection of the troops. Afterward, Gates and Casey presented McKiernan with the Defense Distinguished Service Medal for his decades of service.

“I can’t think of another officer who has contributed so much and given so much to the men and women of this Army,” Casey said.

Carmen McKiernan, Gen. McKiernan’s wife of 24 years, was awarded a Volunteer Service Award, as well as a Department of Defense Certificate of Appreciation for her efforts in the Army community. She made it a habit to visit wounded warriors, attend family readiness meetings and other Army community events.

McKiernan entered the Army in 1972, when he graduated from the College of William and Mary with a bachelor’s degree in history and a commission from the Reserve Officer Training Corps.

Gates took the stage and praised McKiernan for his competency of command in a variety of assignments during his tours of duty.

“Over the course of his career, David McKiernan has served as operations officer at every level of command in the United States Army,” Gates said. “He has handled everything the Army and the commander in chief has thrown at him with supreme professionalism, intelligence and dedication to our nation and the men and women under his command.”

When McKiernan finally took the stage, he thanked his family and the Army for allowing him to serve his country so effectively for so many years.

“I am the luckiest Soldier I know of. I was allowed to lead, develop, often times make mistakes and ultimately be entrusted with large joint formations in war,” he said. “I have savored the responsibility and accountability that accompanies authority.”

The ceremony concluded with a traditional pass-in-review, as all units passed by the official party and rendered a final salute. After the Fife and Drum Corps left the field, the Army Band stuck around to play the Army song, but not before breaking into a few bars of “Auld Lang Syne.”

While McKiernan’s post-Army life was about to begin, Casey said his imprint on the Army won’t soon be forgotten, and he thanked the entire McKiernan family for their service:

“Dave and Carmen McKiernan have given their today, so that others, in Kuwait, in Bosnia, in Kosovo, in Iraq, in Afghanistan and in the United States of America can have a better tomorrow, and we owe them our gratitude.”

FORT MYER, Va. -- The recent commander of forces in Afghanistan ended a…