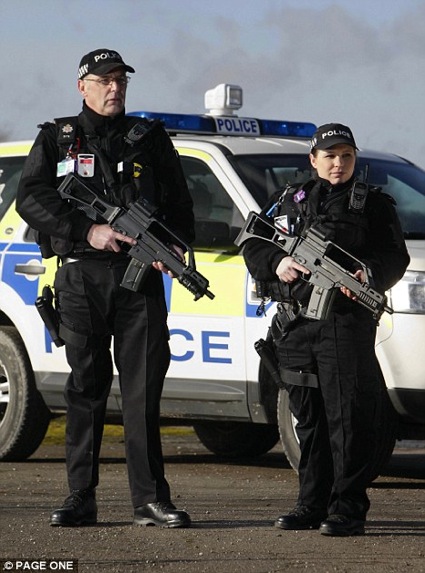 Emily is a firearms officer with the Civil Nuclear Constabulary – a squad of 750 cops dedicated to protect nuclear power stations and radioactive material – and stands at just 4ft 10ins.

The 23-year-old even jokes how her Heckler & Koch assault rifle, which fires 750-rounds-a-minute, is almost as big as she is.’

Speaking to Police Review magazine today she said she applied to join the police after spotting an advertisement in Cosmo back in 2005.

She said that her height always attracts ‘cocky comments’, but that she is used to getting a ribbing from workers as she patrols her beat.

Emily told the magazine: ‘A few of the site workers have said “That gun is nearly as big as you” – the usual banter. But I think they are used to seeing me now.’

And she revealed that other officers in her constabulary always know when she’s been driving the police Land Rover because the driver’s seat is so far forward.

She said: ‘All I get is “Oh, Emily’s been driving this car” just because they cannot get in it because the seat is so far forward.”

The weight of carrying full kit – including a pistol and machine gun as she patrols the Harwell Science and Innovation Campus in Oxfordshire – was initially a shock to the mini-PC.
She revealed: ‘We have got a belt with a Glock pistol on a leg holster.  And with the body armour, tactical vest and G36 rifle, I think it is an extra stone and a half.’

Speaking about problems that come with her height, she added: ‘I found it difficult doing the firing range from the sitting and kneeling positions because when I kneel I am so much smaller than everyone else.

‘The target is a lot higher for me. I was trying to get myself into positions with the body armour on and I could not cross my legs and bend my arms in the right way.

‘I managed to get around it though, get some extra training and find ways that work for me.’

Read the rest of the story at Daily Mail. 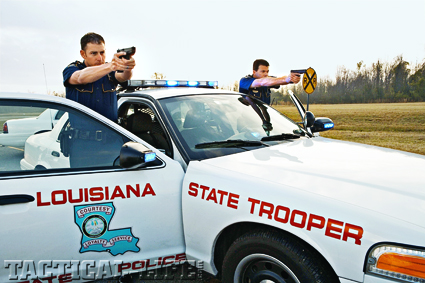