In yet another clear indication that President Obama has no intention of honoring his campaign promise to renegotiate NAFTA, the administration is preparing to present Congress with another set of regulations allowing Mexican long-haul trucks to have free access to U.S. roads.

“The proposal [to get Mexican trucks back on U.S. roads] has been through the interagency process … and it is ready to go to the Hill,” Doug Goudie, the trade director at the National Association of Manufacturers told the Washington Times.

WND reported on March 12 that one day after signing the $410 billion omnibus funding bill into law, along with the provisions ending the Department of Transportation’s Mexican truck demonstration project, the Obama administration announced intentions to restart the program as soon as possible.

The Obama administration’s determination to see Mexican long-haul rigs roll throughout the United States is a slap in the face for labor unions such as the Teamsters who supported candidate Obama in the 2008 presidential election, in part on his promise he would as president renegotiate NAFTA to preserve U.S. jobs.

The sudden and sharp policy reversal will also be a blow to many Democrats in Congress, including Sen. Byron Dorgan, D-N.D., and Rep. Peter DeFazio, D-Ore., who fought hard for the last two years to have language inserted into legislation stopping the DOT Mexican truck demonstration project, out of concerns that Mexican trucks do not conform with U.S. safety regulations.

Then, on March 16, WND reported that Mexico, in retaliation for the vote to ban funding for Mexican trucks, imposed new tariffs on 90 U.S. products exported to Mexico from some 40 U.S. cities.

“It is really putting a huge economic stress on the producers,” he said, arguing the tariffs had placed an additional $2.4 billion cost on U.S. exporters.

LaHood indicated that the decision on whether to open the border to Mexican trucks as a limited demonstration project or on a wider basis has not yet been made, but he indicated the Department of Transportation planned to bring new legislation to Congress in June.

Red Alert has previously reported the Obama administration has ignored its campaign promise and decided against renegotiating the North American Free Trade Agreement.

Concerns continue that, in Mexico, compliance with the U.S. Commercial Vehicle Safety Alliance standards will be met by Mexican inspectors taking bribes, the typical method used to get around onerous government regulations.

The Mexican truck issue was rancorous during the last two years of the Bush administration as Secretary of Transportation Mary Peters fought off repeated efforts by Congress to confine Mexican trucks to a narrow 20-mile commercial area north of the southern border.

WND reported that after the DOT Mexican truck demonstration project had begun, an examination of the Federal Motor Carrier Safety Administration database revealed hundreds of safety violations by Mexican long-haul rigs rolling on U.S. roads under the project.

The contention of opponents to the Mexican truck demonstration project has been that Mexican trucks and truck drivers do not reliably meet U.S. standards.

WND also reported that in an argumentative Senate hearing in March 2008, North Dakota Democratic Sen. Byron Dorgan in tight questioning got Peters to admit that Mexican drivers were being designated at the border as “proficient in English” even though they could explain U.S. traffic signs only in Spanish.

In the tense hearing, Dorgan accused Peters of being “arrogant” and in reckless disregard of a congressional vote to stop the Mexican trucking demonstration project by taking funds away.

As WND reported, opposition in the House was led by Rep. DeFazio, who in Sept. 2007 accused the Bush administration of having a “stealth plan” to allow Mexican long-haul rigs on U.S. roads.

“This administration [of President George W. Bush] is hell-bent on opening our borders,” DeFazio then said, “but has failed to require that Mexican drivers and trucks meet the same safety and security standards as U.S. drivers and trucks.”

Despite strong congressional opposition, the Department of Transportation under President Bush had announced it planned in its final months in office a decision to extend the Mexican truck demonstration project for another two years, in an apparent attempt to force the incoming Obama administration to comply with a departmental decision that had been finalized before Obama Secretary of Transportation Ray LaHood took office. 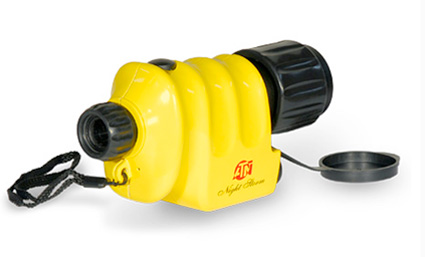 The ATN Night Storm 1 Yellow is a lightweight and rugged night vision monocular.