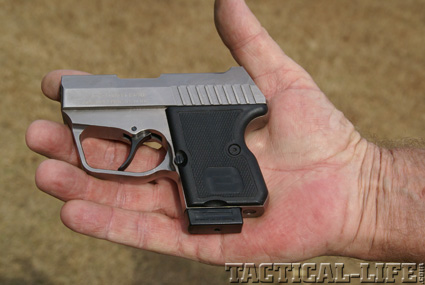 Pocket pistols have been around for as long as there have been pistols, and pockets to put them in. These downsized guns don’t normally get a lot of attention but during the last couple of years little guns have been big news in the firearms industry.

A number of manufacturers have introduced .380ACP pistols in size packages that were once the exclusive province of the lesser-powered .25ACP and .32ACP. The demand for these guns has been significant, and some of the new players in the game have no previous history in the pocket gun market.

Magnum Research is one of them. Best known for their massive, big bore Desert Eagle semi-autos and BFR (Biggest Finest Revolvers) single-action revolvers, their new .380ACP Micro Desert Eagle is a radical departure from previous product lines. But if my tests are any indication the Micro Eagle will be a big player in the small gun market.

The Micro Eagle is built on a stain-less steel frame/slide platform with an external hammer double-action-only (DAO) trigger system and an inertia firing pin that provides multiple strike capability. Empty weight is 14 ounces. Fully loaded it tips the scales at 16 ounces.

Although a bit heavier than some polymer frame guns, it’s still a palm-sized pistol. Overall length is 4.52 inches, height is 3.71 inches, width at the widest point (slide) is a slender 0.90 of an inch, and the barrel measuring 2.2 inches. Capacity is 6 + 1. One magazine is supplied, with additional magazines available. The steel magazine features six witness holes on the left side, steel follower, extended plastic base plate and is a drop-free design. The magazine release is located left side just behind the triggerguard. A loaded chamber indicator peeks out on the top of the extractor.

The trigger face is lightly grooved, and total trigger travel is about 0.88 of an inch. The trigger pull is extremely smooth with a noticeable stacking just before the break. Due to the shape of the trigger and the minuscule size of the gun, I was not able to get a definitive trigger pull weight with my gauge. It averaged out at about 10 pounds, and in comparing it to some of my DA revolvers with known pull weights I would say that 10 pounds is accurate.

There are no external safeties or a magazine safety. The slide does not lock back on the last round and there is no provision to lock it back. The gun is “basic simple” – insert a magazine, cycle the slide to chamber a round and pull the trigger to fire it. When the gun is empty it goes “click.”

The first impression I got when handling the gun was that whomever designed it had probably spent a fair amount of time toting a pistol in a pocket. The Micro Eagle is totally dehorned and rounded smooth. The hammer is well shielded, and only emerges from its shielded recess at the end of the trigger stroke.

The second impression was that the designer understood the value of sharply defined sights even on a pocket pistol. The Micro Eagle features fixed sights integrally milled into the slide but they are generous and well defined. The rear sight notch is in a raised section at the rear of the slide, while the front sight is a 1-inch-long ramp with generous cross-hatching. Even in harsh direct sunlight the cross-hatching “grayed” out the front stainless steel ramp and provided excellent contrast with the rear notch. It was easy to acquire a precise sight picture.

Gas-Assisted Blowback
Magnum Research describes the operating action as a gas-assisted blowback design. It is unusual and requires an explanation. Two forward angled ports are cut into the barrel just forward and above the chamber, with the expelled propellant gas providing an aid to cycling the slide for ejection. The barrel is fixed during operation but removable for cleaning due to a lug on the underside of the barrel that mates with a corresponding cutout in the frame. Twin recoil spring/guide rods ride in recesses on each side of the slide, and lock up solidly at the front and rear of the slide.

Disassembly for cleaning is accomplished by removing the magazine, clearing the chamber and then grasping the pistol in the left hand. With the left hand, retract the slide slightly until witness marks on the right side of the slide and frame align. Grasp the barrel and turn it 180 degrees clockwise until the barrel underlug clears the recess and is in the top of the ejection port. The upper unit is then slid off the frame to the front with the barrel and recoil springs staying with the slide. The barrel and recoil springs can then be removed.

Range Time
Prior to taking the Micro Eagle out to my range I added a couple of drops of oil to the barrel/slide junction, nothing else. I wanted to shoot it right out of the box.

I had done enough dry firing with the gun to become familiar with the sights, grip and trigger, so I saw no real sense in plinking. Instead I set up a clean IDPA silhouette target at 7 yards, took a firm two-handed grip and fired a six-round magazine of the American Eagle loads slowly and deliberately, aiming at the 0 in the COM chest zone.

The first round impacted just to the left of the 0. Four of the remaining rounds resulted in a five-shot group measuring 1.5 inches vertically with virtually no horizontal dispersion. One round was pulled to the left about 1.5 inches to open the overall six-shot group to 1.5 by 1.5 inches. The group center was about 2 inches left of POA (point-of-aim) but elevation was dead on. Recoil was snappy, but not objectionable. I would call it about the same as a Scandium .38 snub-nose revolver firing .38 Special +P rounds.

Considering the abbreviated grip and lengthy trigger pull I was impressed, so I marked each of those rounds with a green marker and went back to 20 yards. Another six-round magazine of American Eagle went downrange and the resulting group was just a larger version of the first. Vertical dispersion was 7.65 inches with 3.25 inches of horizontal dispersion. The group center was slightly to the left of the 7-yard group, with elevation being on. Although the group was to the left, five of the six rounds found the chest 0 zone.

For a pint-sized pistol, that level of accuracy was surprising. The fact that the group center was 3 inches left at 20 yards is, to me, meaningless. A few swipes with a Swiss file along the right inside edge of the rear sight channel would center it. The sights are generous enough to easily allow that, and are remarkably good for what is, essentially, a “close range point and shoot” pocket pistol.

Once that was done I assembled all of the test rounds, put up a clean target and fired a six-round composite group of each at 7 yards with a deliberate two-handed hold. I could have covered that 30-round group with my hand, and it was centered at the impact point I had already established for the American Eagle FMJ. The Micro Eagle did not seem to be finicky regarding where it placed loads of differing weights and velocities. It did, however, display a couple of quirks.

Of the 200+ rounds fired during the Micro Eagle test, the only malfunctions (two) occurred during this composite group test. Both were related to am-munition bullet profile and while calling them malfunctions is technically accurate, it’s not quite fair because both are preventable.

While running a six-round magazine of Hornady JHP/XTP ammo, the last round in the magazine failed to feed properly and produced a tip-up jam. I manually seated that round and finished the group test. Subsequent tests with the Hornady load showed that to be normal. That bullet profile just didn’t want to chamber as the last round in the magazine. I solved that by loading a different round from the test ammo selection as the last load out and no further malfunctions occurred with Hornady.

For subsequent Winchester use I simply loaded a couple rounds in the magazine, chambered one and refilled the magazine with the SXT loads. For some reason, when six rounds are loaded into the magazine and the slide cycled, the SXT profile hangs on the feed ramp. Chamber a round and refill the magazine with six and it all works. There were no further malfunctions.

Every gun has quirks. Those were the only two I found with the Micro Eagle. And, I did look for them.

Guns of this type are not normally carried as a primary arm. Their usual role is as a back-up gun or even a third gun. In that respect one wouldn’t normally count on being able to smoothly draw the gun, assume a classic two-handed hold and deliver precise fire. Most often, these guns are grabbed with weak or strong hand, and fired rapidly at close range. That usually means Plan A has gone down the dumper and this is what’s left. When one reaches that point, two factors become critical. The first is can the shooter hit with it? I found this gun is easy to hit with whether using a two-hand hold or weak or strong hand point shooting. The second is will it function as intended with full reliability?

Reliability can be an issue with pocket semi-autos, so I decided to see if I could make the gun malfunction. I started with a very loose, limp-wrist grip in the strong hand. Three magazines of all test loads were fired with no malfunctions. I then held the gun even more loosely with just the index finger on the grip. Same thing. If I could get the trigger pulled, the primer was struck, the gun fired, ejected, fed and was ready to fire again. I did the same thing with my left (weak hand) and the results were the same.

I then held the gun sideways right and left in both weak and strong hands, and even upside down with the left hand holding it and the right finger pulling the trigger. The results were the same. I could not induce a failure to fire, eject and feed. The gas-assist system seems to be remarkably reliable.

By this time the gun had close to 200 rounds through it with no cleaning or lubrication other than my initial few squirts of oil. I then set up a sandbag rest at 7 yards and fired five-round groups for accuracy tests. The Micro Eagle exhib-ited the kind of accuracy that I initially saw with the off-hand groups at 7 yards.

Final Notes
Reliability is critical with any handgun carried for self-defense but mandatory in a back-up role. If you have to go to a backup, it better work. The Micro Eagle always worked, even when I tried to make it malfunction. Combine that with more than adequate accuracy  ease of use, very comfortable carry features, and it becomes a solid choice for anyone looking for a handgun in
this class of pistols.

Pocket pistols have been around for as long as there have been pistols, and…