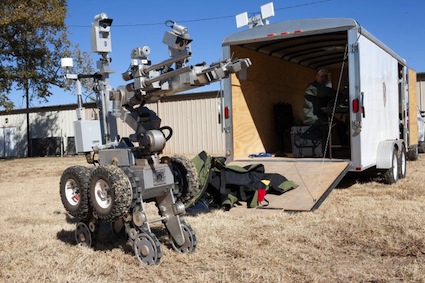 Midland Police Officer and Bomb Technician Dylan Hale wirelessly controls the Remotec Andros robot via the new Lithos Radio System Tuesday at the MPD Training Facility. The new system eliminates the use of controlling the robot with an attached fiber optic cable and will increase its operating range and mobility when working on bomb and tactical operations. Photo: Cindeka Nealy/Reporter-Telegram

The new system will make it easier for the police to control the device, which will make it more effective and safer for officers involved.

“Before, we had a fiberoptic line controlling the robot, which was basically a long tail,” said Officer Dylan Hale, a bomb technician with MPD. “We have broken wires and damaged them before, and when that happens the robot is effectively dead.”

The new $38,000 wireless rig was attached to the $165,000 robot to make the device user-friendly and was paid for by a grant from Homeland Security, he said.

Hale said the obvious use would be to help with counter terrorism but said the growing threat is Mexican drug cartels. The cartels are using improvised explosive devices to booby-trap drug loads to either destroy evidence or send a message to law enforcement, he said.

Hale brought up the story about the drug cartel killing a man and dressing him as a police after they placed an IED on him and called police. The intended target was to kill first responders to send a message.