by Cameron Hopkins
in Exclusives, News
0

I’m being watched. Covert security cameras are everywhere, atop traffic lights, in the hotel foyer, on the bus, in the subway, around the Eiffel Tower. I’m in Paris right now for the bi-annual Milipol show which, at the risk of redundancy, occurs every two years. It started yesterday.

American gun companies are well represented at this European conflux of military and police— Mili-Pol, get it— which attracts about 800 manufacturers. I want to see the latest technology for keeping everything from riot control to IED-proof vehicles, but first I have to get past the security guards at the entrance. It’s not a long line, but I still  have to wait. Ruddy faced Russians barge to the front of a queue, the latest nouveau riche in arms world. Arabs get the red carpet.

Inside, it’s a mixed crowd. There are dark-suited businessmen along with gold-braided generals and blue-uniformed commissioners. There are a lot of Paris policeman, no doubt milking their 36-hour work week for some over-time at the Milipol show.

Outside, throngs of smokers puff away. Surprisingly, France banned smoking in public several years ago which is so un-French. Even the bars and cafés comply.

Milipol has an eclectic mix of products. Renault, France’s big car maker, has a large stand with all sorts of police car models on display. A helicopter manufacturer is here. BMW’s booth is flashing with police motorcycle lights. Blue is the dominant lightbar color in Europe, not red or yellow.

By far the most dominant product category is surveillance. There are long range cameras, short range cameras, robotic cameras, hovering cameras, hidden cameras and vehicular cameras. One company sells an interface for a police car that allows it to tap into the camera(s) in every city bus to see what’s going on aboard the bus.

The American conglomerate L3 has a section of its spacious booth (monitored by its cameras) set aside for “Electronic Warfare.” I think to myself— is there any other kind?

There are drones as small as a shoebox. One company has a four-rotor heli-camera that runs on batteries and can hover noiselessly overheard while relaying real-time images back to its controller.

Right next door to the L3 booth is another American company— DELL. Why am I not surprised? Michael Dell is selling more computers here than Smith & Wesson is guns. 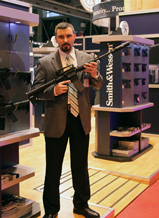 Which is not to suggest that Smith & Wesson is not doing land-office business. I stop by their booth to chat with Joe Bergeron, their wunderkind product manager who ramrods the M&P product line.

“Well, mainly for the M&P,” Joe replies when I ask him what brings him to Paris in November.

“The pistol or the rifle?”

“Both. The new M&P4— that’s the full auto version— is getting a lot of attention. European customers have only been able to buy from Colt or FN, so they’re liking our M&P4 a lot,” Joe says.

“So showing your new wares is the main reason you’re here?” I ask.

“We’re here to support our international distributors as well, and to show new products,” Joe elaborates.

“Of which the M&P is the most appealing?” I wonder.

Smith & Wesson is in the American Pavilion. It’s a section of the show floor that’s cordoned off for U.S. companies. SureFire is displaying their new X400 WeaponLight. There’s no other American gun company besides Smith, which strikes me as odd. Then I remember that most of the major players in today’s military and police markets are European— SIG, FN, HK, Glock.

A company called SIM (I didn’t get what it stands for) proclaims in large bright letters that it specializes in “encrypted CDFM video transmissions” as well as “photonic surveillance.” I have no idea what either of these are, but I can’t help but think they’re not good if you’re of a mind to hide.

There are companies that sell nothing but “tracking and location technology” while others specialize in “thermal imaging.” One stand is there to take orders for “biometric imprints” which, I suppose, is so that the company that sells a long-range camera can scan your cornea. 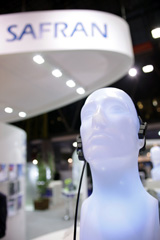 The eyes don’t have it all. There’s a company selling voice identification and “audio forensic equipment” which is why bad guys should never use a cell phone.

The big boys are all here. Raytheon. General Dynamics. Thales. EADS. These companies have marketing budgets bigger than the GDP of most African countries.

I’m shooed out of the aisle by the bodyguards of a Very Important Person dressed in a bisht and shemagh, traditional Arab clothing. He’s being hustled to a waiting throng of eager executives in the EADS Defense & Security booth. This is the mega-multi-national conglomerate that makes the Airbus, the Euro fighter and everything from tanks to tiddlywinks. He’s probably there to pick up a few dozen fighters for his homeboys back in the desert.

I look up in the ceiling and see a security camera whir to focus on the VIP. Welcome to Milipol, I think. 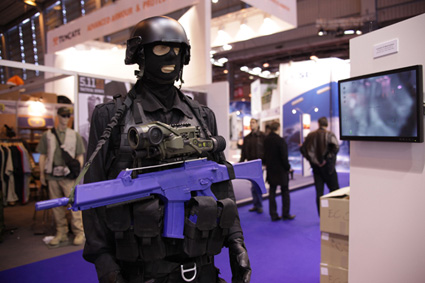 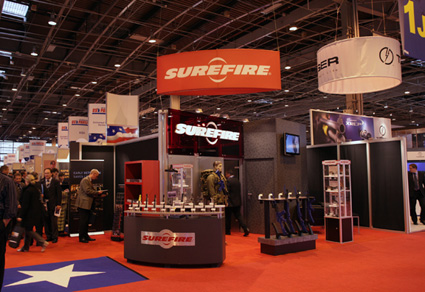 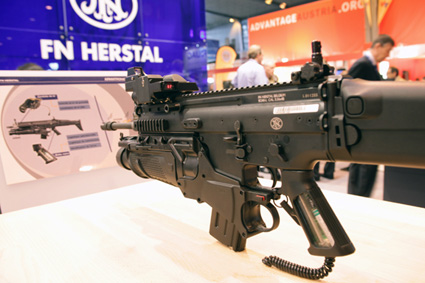