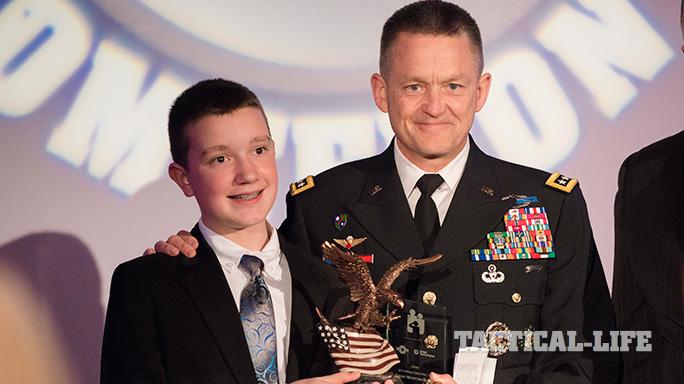 The following is a release from Shannon Collins and the U.S. Army:

Gen. Martin E. Dempsey, chairman of the Joint Chiefs of Staff and keynote speaker, and Jason Brown, a former professional athlete, honored the sacrifices of some two million military children around the world. Out of more than 500 nominations, six were chosen, representing each service branch, including an Army child, who created a nonprofit organization to help wounded warriors.

“Our awardees have pursued excellence; they’ve made it a priority to serve others. They’ve inspired us. They’ve done it with character,” Dempsey said. “I’m incredibly proud and honored to be the chairman of such a fighting force with incredible military Families who support them. Our winners tonight are perfect examples of the stellar quality of military kids, and we’re so fortunate to have them in our military family. This nation asks a lot of each of you, and each of you continues to prove day in and day out that you are strong, that you are resilient and you are full of love of our country and for each other.”

Brown said he was honored to speak during the event, which took place at the Ritz-Carlton hotel, and was inspired by the military children. While he has never personally served in the military, his older brother, Lester Bernard Brown II, paid the ultimate sacrifice, Sept. 20, 2003, in Afghanistan, while serving in the Army.

“I’ve been so touched by military Families,” Brown said. “And my big brother was everything. He gave me encouragement every single day. He wanted me to be an even better person than he was. He was a hero. And these kids, I was invited here to inspire them but after learning about them, I’m the one who’s inspired. They’re the best and the brightest, not just academically, but service minded, who have gone out of their way to help out their fellow man, to help out their Families, to help out their communities and not just in America in the entire world,” he said.

Each April – the Month of the Military Child – the winner from each service branch receives a $10,000 cash award and a laptop, and is flown here with a parent or guardian for a special recognition ceremony.

For Cavan McIntyre-Brewer, 13, he likes to stand up for veterans.

He visited a veteran care facility in 2008 and noticed many of them did not have socks. He created a nonprofit organization, the Socks for Vets program, and has helped 7,500 wounded warriors with socks and other donated items. He advocates for veterans through this program at the state and national levels, promoting events and telling the stories of those he served. He also assists his sister with fundraising for her program, Heart Hugs, which involves collecting, sterilizing and distributing compression pillows sized for pediatric heart patients.

“Veterans and wounded warriors aren’t that guy in the wheelchair or a homeless person that no one seems to care about. They are normal people who want the same things we do, and when I spend time with them, I feel like my family just gets bigger and bigger,” McIntyre-Brewer said.

This is the first year a child was chosen for the Army and Air National Guard.

“I’m really proud to be able to represent my branch and to bring light to what we go through, too, as military children,” Zach Parsons, 16, said.

Gen. Frank Grass, chief, National Guard Bureau echoed his sentiment. “What a great opportunity to include a Guard Family here tonight,” Grass said. “Our military child of the year represents the 460,000 men and women of the Army and Air National Guard. He’s just an amazing young man.”

While Parsons’ father was deployed to Afghanistan, he and his mother took care of an 80-acre farm with 50 head of cattle and then his father was injured. Taking on this increased responsibility has been tough, but has made him stronger, Parsons said.

“It’s been tough for my mom and I but it’s helped me develop a lot of character traits and skills I now have so I can be a leader in my community and I can be successful in 4-H,” he said. “I owe it all to my experience to being a military kid because I’ve been able to gain and learn all that respect,” he said.

The general said Parsons is most proud of being on the Missouri National Guard Teen Advisory Council because it allows him to advocate for support of military children. By sharing his experience of his dad being away for training, deployment and injury, he is able to relate to a large number of military children.

For Air Force winner Sarah Hesterman, 16, she wanted to relate to girls across the world and to have a voice for those who did not. While her family is stationed in Qatar, she founded Girl Up Qatar, a club that works to promote the rights of women and girls in the Middle East and around the world, and is a part of the United Nations Foundation program Girl Up. Her goal is to promote gender equality and to develop her own nonprofit organization that provides access to education and resources to girls in situations of conflict.

“The tradition of service and excellence and character runs in her family,” said Air Force Lt. Gen. Stephen Hoog, assistant vice chief of staff and director, Air Staff, Headquarters Air Force. “I believe she might be in a key United Nations position someday.”

Hesterman said she is honored to represent all military children by receiving this award and to have a platform to speak about the life of a military child, full of struggles with moves and parent deployments. She is also grateful to being a military child.

“Girl Up has been an amazing opportunity that I wouldn’t have had unless I was a military child,” Hesterman said. “Living somewhere across the world as the daughter of someone in the military gives me the chance to create a positive change in the world and to stand up for female empowerment, which is something I feel so strongly about,” she said.

Caleb Parsons, 18, took care of his three younger siblings while his parents were deployed. During that time, he maintained a 4.21 grade point average, was named outstanding cadet three times in junior Air Force ROTC and earned the Daedalian Award for patriotism. His instructor said he sets high standards, is a natural mentor, has a strong sense of discipline and lives the Air Force core values. He has also been selected for the Army’s U.S. Military Academy.

“These are not children but people wise beyond their years,” said Coast Guard Commandant Adm. Paul Zukunft. “Caleb’s father is a petty officer leading our counter drug efforts down in Miami. His mother is an Air Force staff sergeant stationed in Virginia. His grandfather served in the Vietnam Era. This is an absolutely amazing family. When we talk about the next chief of staff, on June 29, Caleb will take his appointment and check into West Point, and he’s going to take his service to our nation to another level.”

Caleb Parsons said it was an initial challenge to be the head of the house while his parents were deployed but other families would check in on them to make sure everybody was okay and getting along.

“In the military, you’ve got two families, your biological one and the military,” Caleb said. “Military families take care of each other and that’s just one of the amazing things about it.”

Christopher-Raul Rodriguez, 17, faced adversity when his mother left his alcoholic biological father and lived for two years in women’s shelters and temporary living facilities. Rodriguez credits her determination to find a job and the motivation he received from his mother and stepfather to his success.

“I’ve had to come from the streets and build my way up. A lot of motivation came from my mom and stepdad. They really helped me out,” Rodriguez said. “There’s no reason to ever give up. This has all been breathtaking.”

“He’s just really a fine man and has a terrific family, talk about resilience, strength of character and a determination to succeed no matter what,” the general said. “Chris has overcome adversity and demonstrated all those qualities in spades. His perseverance and dedication to be the best, even in those difficult times was inspiring to his entire family. His teachers and counselors universally highlight his selflessness and his willingness to give to others,” he said.

Rodriguez is the captain of his baseball and soccer teams. Outside of school, he coaches baseball, soccer and basketball in the youth leagues. He also works with special needs children as part of the Lejeune High School Buddy Club.

“When they were living in the shelter, Chris made a promise to his mother,” Lukeman said. “He promised her that one day he would become somebody that she could be proud of. Well done Chris; you did it.”

Emily Kliewer, 17, works with special needs children. She volunteers with the Special Olympics as a swimming instructor, volunteer coach and hugger. She is also a peer-on-peer mentor, where she is an assistant teacher and friend to special needs children. She has also placed in multiple events at the Florida state and regional levels for swimming, and is a National Merit Scholarship Program finalist.

“Emily reminds us that military children serve as well. It’s not just about deployments and separations or managing in her case five moves in 10 years, from the Pacific northwest, to Pearl Harbor, to London, to Annapolis, Maryland, to Norfolk, Virginia, but Emily, like so many of our kids, just takes service to another level,” said Navy Adm. Jonathan Greenert, chief of naval operations.

Emily believes in paying it forward. She has a commitment to others, general compassion and concern and she’s that advocate for positivity,” he said.

Kliewer said she loves working with the special needs children.

“I volunteer every summer; it’s incredible; I just love it,” she said. “They’re just so innocent and happy all the time. It brings a new perspective on life, and you just have to hug them. It’s so great.”

Kliewer said she is grateful to Operation Homefront for the award and for their program. “It’s incredible what they’re able to do to help military families because sometimes the help they provide is just that little extra help you need to really get started again, to keep going … and it kind of helps with that.”

“Operation Homefront provides emergency financial and other assistance to the Families of our Service members and our wounded warriors,” Ferrell said. “We want to make sure that military Families are stable and secure, be that through financial assistance or from our transitional or our permanent housing, with donated mortgage free homes.

“These six great kids are a representation of what these families sacrifice every day,” he said, a 23-year Air Force veteran who has shared moves and deployments with his own children. “These kids are incredible. The passion and service these kids bring – they’re creating nonprofit organizations. I’m in awe of them,” he added. 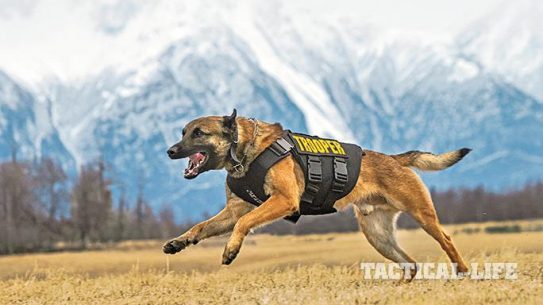 Vested Interest in K9s provides bullet- and stab-resistant protection for our four-legged enforcers!