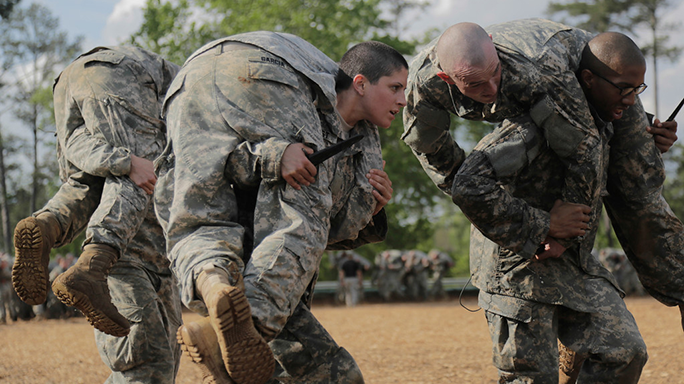 In this file photo, female Soldier Capt. Kristen Griest carries a Soldier during Ranger School. She was one of the first two women to make it through the 62-day leadership course on Fort Benning, Ga.
(Photo by Spc. Nikayla Shodeen)
Comment(s)

Acting Army Secretary Patrick Murphy and Army Chief of Staff Gen. Mark A. Milley told lawmakers the Army is opening the door to every job a Soldier can hold regardless of gender.

“This is the right decision for our Army,” said Murphy, testifying before the Senate Armed Services Committee today. “The personal courage and selfless service made by women in our Army is no different than that exhibited by our men … we owe them the respect and honor to offer them the opportunity to succeed anywhere in our Army based upon only the merits of their performance.”

Murphy said that after several years of extensive research, collaboration and practical evaluation, the service came to three primary conclusions – that women are capable of performing every job in the Army; that the maintenance of high standards, performance and professional conduct will be based solely upon what the position requires and nothing else; and that leadership is critical to integration.

Murphy added that full integration will likely take several years as the Army adjusts both to the culture and to growing individual skills within the force.

“For the record, I fully support opening military occupational specialties [MOSs] in the United States Army to all Soldiers regardless of gender,” Milley said. “And, I believe full integration of women in all career fields will either maintain, sustain or improve the overall readiness… and our capability of the force if … and only if we maintain and enforce rigorous combat readiness standards and we maintain a merit-based results-oriented organization, and we apply no quotas and no pressure … we will not impose quotas on ourselves.”

Milley said that once approved by Defense Secretary Ash Carter, the Army would execute what he called a “very deliberate, methodical and transparent process” to include developed and published measurable gender-neutral standards based on combat readiness requirements.

“I estimate that effective female integration into infantry, armor and special forces will require no less than one to three years of deliberate effort in order to develop the individual skills and grow our leaders,” Milley added. “The Army is currently in the process of ensuring our facilities comply with law and DOD policies for access and gender-neutral living standards at both our basic and individual training.”

The Army will integrate women through a “leader first” approach, with women able to serve as infantry and armor officers later this year in designated brigade combat teams.

The chief of staff said this spring female cadets and officer candidates, who meet the gender-neutral standard, will be given the opportunity to request either infantry or armor branches.

Milley noted that since 2011, the Army has opened nine MOSs to women and 95,000 positions in combat arms units. Additionally, the 160th Special Operations Aviation Regiment was opened to women in 2014 and Ranger School was integrated this past year.

“These experiences have informed and enabled the Army to successfully implement gender integration and increase our combat readiness,” Milley said. “Make no mistake about it, this process is going to have challenges, but if we proceed with a methodical and deliberate execution, like all previous integration efforts, it’s my belief the Army will be successful.” 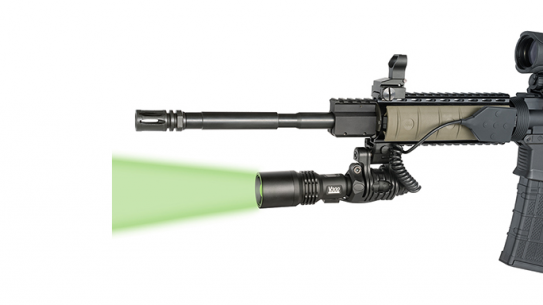