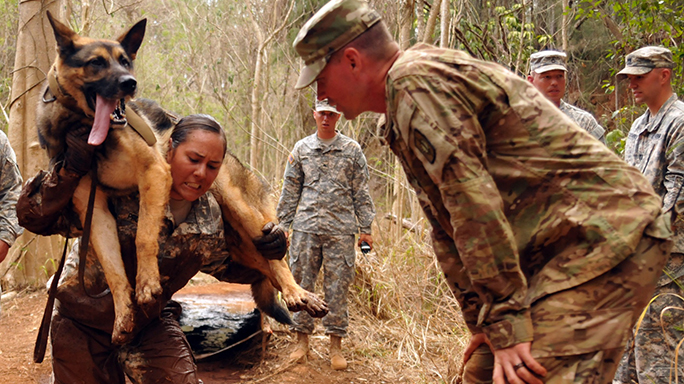 The following is a release from Staff Sgt. Taresha Hill:

More than 25 working dog teams competed and represented the best from the Army, Marines, Navy, Air Force and Honolulu Police Department. The week-long competition tested the mental and physical stamina of both the handlers and the working dogs, driving the teams to give it their all each day.

“Each event was designed to push them past a level of training they may not have experienced before,” said Sgt. 1st Class Cory Lorenz, kennel master, 520th Military Working Dog, or MWD, Detachment, 728th MP Battalion. “We wanted to push them out of their comfort zone.”

One event proved particularly challenging for Sgt. Veronica Pruhs, a military working dog handler with the 520th MWD Detachment and her partner K-9 Jerry. Still considered a pup, K-9 Jerry had a difficult time navigating the obedience course, which had hundreds of doggy toys strewn about the course.

Despite K-9 Jerry’s determination to play with every toy on the course, Pruhs stuck with it and finished the event.

“I didn’t give up,” Pruhs laughed.

Lorenz said he couldn’t be happier with the teams and their dedication in competing in this year’s challenge.

“It gave them the opportunity to see their strengths and weaknesses,” said Lorenz.

Events ranged from a stress-shoot, to tactical and non-tactical detections, a written skills test, an obedience course, handler protection and even a hardest hitting dog event, in which the K-9s were scored based on the strength of their bite by a decoy wearing a bite suit. Lastly, handlers had to negotiate an obstacle course while maintaining positive control over their K-9 counterparts.

While the competition was a challenge for military working dog handler Spc. David Kmosko and K-9 Drago, 520th MWD Detachment, Kmosko said it was also a great learning experience.

“You’re always learning and it’s important to tap into that knowledge that other handlers have,” said Kmosko.

Kmosko also said that K-9s were important to have within the military and civilian police departments and stressed their unique capabilities.

“A dog can find a hidden IED that would take a person a wrong step to find or an extremely expensive and slow-moving piece of equipment to find,” said Kmosko.

Kmosko added, “You’re not going to be able to beat a dog’s nose.”

Police Sgt. Gregory Obara, a working dog handler with HPD, also stressed the important role of K-9s and said that it was the K-9’s unique and superior ability to detect people, drugs and bombs, which helped to keep the islands safe.

“The K-9 is the part that elevates the team,” said Obara.

In addition to exchanging knowledge and building camaraderie, Lorenz said the competition also helped to establish connections within the working dog community.

“Prior to this event, communication between the agencies was nearly nonexistent,” said Lorenz.

Lorenz said this year’s competition was much larger than the one held in 2012 and added, “I hope we can build upon this and make it a tradition.” 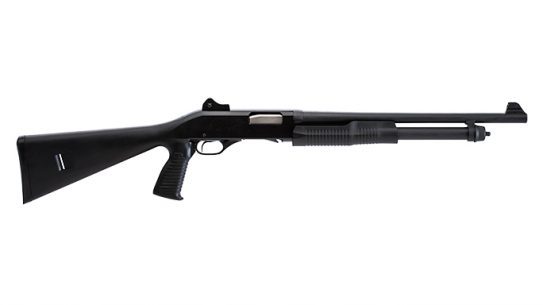