Not too long ago we told you about the famous Luger from the movie Wall Street. It’s in the news again.

The corporate-takeover shark played by Michael Douglas in the movie “Wall Street” brandished a replica and bragged about it as “the rarest gun in the world.” An Indonesian billionaire paid $1 million for the real thing, and it became known as “the million-dollar Luger.”

That was in the late 1980s, when the Douglas line “greed is good” captured the spirit of the times.

On Sunday, under very different economic circumstances, the coveted .45-caliber Luger found a new owner for half that price at a public auction in Anaheim.

Proxy bidder Paul Cole, president of Gun World in Burbank, said he represented a celebrity who chose to remain anonymous.

“The buyer has a huge firearms collection,” Cole said. “He wanted to make this the crowning jewel of his collection. He’s really excited; he’s in tears. And it’s really hard to get him excited.”

Read the rest of Ching-Ching Ni’s article at The L.A. Times. 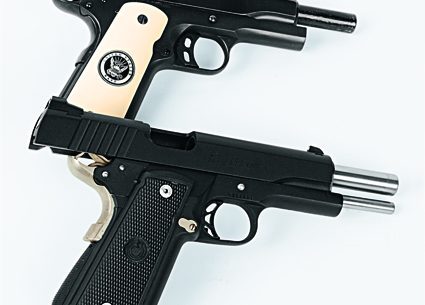 The PARA USA Big Hawg .45 ACP pistol is a trim and reliable big-bore...