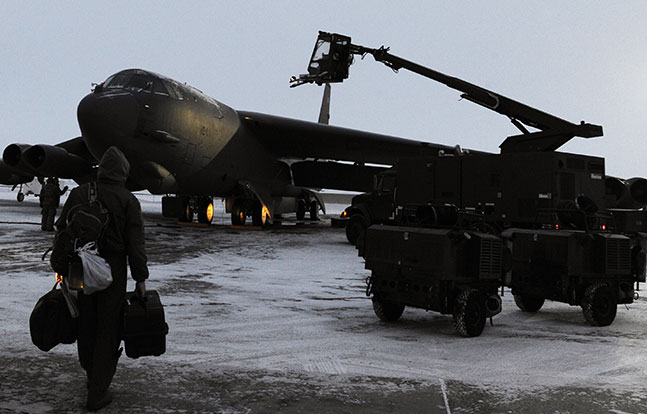 An Aircrew member walks toward a B-52H Stratofortress while it’s being deiced on Minot Air Force Base, N.D. Battling harsh winds and temperatures 20 degrees and below for several days, operations and maintenance Airmen joined together to successfully fly 40 out of 40 sorties during Prairie Warrior surge week. (U.S. Air Force photo/Senior Airman Brittany Y. Bateman)
Comment(s)

Battling harsh winds and temperatures 20 degrees and below for several days, operations and maintenance Airmen at North Dakota’s Minot Air Force Base joined together to successfully fly 40 out of 40 sorties during Prairie Warrior surge week here, Nov. 17-20.

The purpose of the exercise was to demonstrate conventional capabilities in a realistic training environment to simulate combat.

“Prairie Warrior provided us with some outstanding visibility because we were able to exercise realistic and challenging scenarios that we don’t normally encounter,” said Col. Kieran Denehan, the 5th Operations Group commander. “This is where we put our training to the biggest possible test outside of a combat environment.”

Air crew members were issued weapons, met with a chaplain, received a weather intel brief and a pre-takeoff brief just as if they were preparing for war, said Capt. Michael Devita, the 5th Operations Support Squadron conventional plans flight commander.

With only 16 jets available and 12 scheduled to fly on the first day, the maintainers’ skills were put to the test to have 10 jets prepared for takeoff first thing the next day.

“A B-52’s normal flying rhythm is every other day,” said Senior Master Sgt. Paul Crisostomo, the 69th Aircraft Maintenance Unit lead project supervisor. “Our ability to be able to fly a jet one day and turn around and fly it twelve hours later speaks volumes of the good work that our Airmen are doing out there.”

In addition to the 22 sorties in the first two days, they also flew 10 on the third day and eight more on the fourth to conclude the exercise, Crisostomo said.

The demanding mission of Prairie Warrior had Airmen working 12 hour shifts the entire week to provide full-spectrum deterrence and maintenance on the B-52H Stratofortresses. Day shift focused primarily on getting the bombers loaded and up in the air, while night shift was responsible for recovery, refueling, service and pre-flight checks.

“I only had so many load crews and maintainers,” Crisostomo said. “They were all hopping from jet to jet just getting the job done!”

Because of their hard work throughout the week, the base was able to fly 40 out of 40 sorties with 33 on-time takeoffs and successfully dropped 119 munitions.

Crisostomo attributes the most successful surge Minot AFB has had in about five years to the outstanding teamwork among all of the squadrons.

“Prairie Warrior was a huge success for us,” said Col. Jason Armagost, the 5th Bomb Wing commander. “Just weeks after coming out of succeeding in a large-scale nuclear exercise, we accomplished our base’s largest conventional exercise of the year — and we crushed it.” 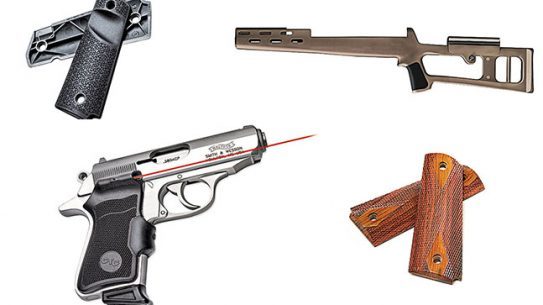 Update your classic military surplus warhorse with some of today's top accessories!