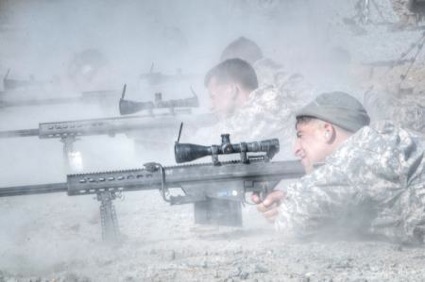 A mobile sniper training team added a significant number of qualified snipers to the ranks of the 82nd Airborne Division here Nov. 11.

While 32 Paratroopers began the course, those who failed the periodic evaluations were allowed to complete the training, according to senior noncommissioned-officer-in-charge, Staff Sgt. Jeffrey Lewis of 2nd Battalion, 29th Infantry Regiment, of Fort Benning, Ga.

“The thing that gets most of them is target detection and stalks,” said Lewis.

The year-round basic sniper course at Fort Benning is normally five weeks, but the MTT finished early because Fort Bragg does not offer the same targetry support. As a result, students shot steel targets more than paper. Sparking steel alerted shooters to a hit, which saved time, said Lewis.

Besides ample range time, a great benefit of the course according to Spc. Alexander Day of Headquarters and Headquarters Company, 1-504th PIR, was learning how to educate his command on the proper employment of snipers.

“Being a sniper, your primary mission is to deliver long-range precision fire to key targets, but your second mission is to collect battlefield intelligence. A lot of time we’re sent out 12-24 hours ahead of the main effort, and we collect intelligence,” said Lewis.

Among the civilian instructors was Stan Ellis, who was the first NCOIC of the Army sniper school when it opened in 1987. Ellis wrote Field Manual 23-10, the Army’s sniper manual.

Because many students have already deployed in scout/sniper sections, the instructors often learn from them as well, gleaning what has worked well in the field in Iraq and Afghanistan.

Reuters report: Why are Afghan night raids under fire?