Marines are always looking for a tactical edge, and the Marine Corps Systems Command has given them one with its new Military Enhancement Kit (MEK) for the Mossberg 500A2 12-gauge pump-action shotgun.

According to a Marine Corps press release, the MEK upgrades the 500A2 with a shorter, vented breaching barrel and three interchangeable buttstock attachments: a pistol grip, fixed buttstock and a collapsible buttstock.

“Having the ability to transition through the three stocks—the folding, the pistol grip and the fixed—makes the weapons more versatile,” said Gunnery Sgt. Michael Flor, ballistic breaching course chief and senior instructor at the Methods of Entry School. “The kit allows the weapon to be tailored to the tactical user at the user level.”

The barrel is 18 inches long, making it nearly three inches shorter than the standard 500A2 barrel, and therefore less cumbersome.

“When you’re breaching or conducting methods of entry, having the ability to secure the weapon on your body without it becoming cumbersome is important,” Flor said. “Having a shorter barrel and a pistol grip removes all of the extra space that is not necessary for ballistic breaching. So when you stow it, you can stow it much more rapidly.”

The Corps says current Mossberg 500A2 shotguns can be modified with a special adaptor from the MEK that lets Marines swap out buttstocks in a matter of seconds without additional tools.

“For instance, if reconnaissance Marines repel from a helicopter carrying a long weapon system that’s unsecured, it can catch on parts of the air frame or the rope and become a safety hazard,” Flor said. “Having a shorter weapon system, secured tightly, is more manageable. That’s an advantage.”

The MEK is being fielded by select units across the Marine Corps, the press release says. It’s designed to augment the 500A2 which is used by Marine reconnaissance, security forces, military police, explosive ordnance disposal and special operations units. 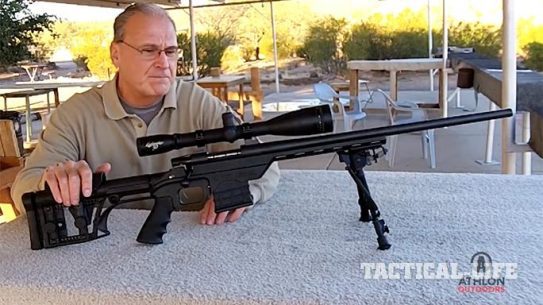 WATCH: A Closer Look at the Weatherby Vanguard Modular Chassis

S333: A Closer Look at the Double Barrel Pistol That...