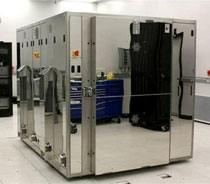 The company claimed ownership of this record by completing the final demonstration milestone of the U.S. military’s Joint High Power Solid State Laser (JHPSSL) program, Phase 3. The achievements included turn-on time of less than one second and continuous operating time of five minutes, with very good efficiency and beam quality. Last year, Northrop Grumman reported reaching a JHPSSL Phase 3 power level of 15.3kW in March and a power level of 30kW in September.

“This achievement is particularly important because the 100kW threshold has been viewed traditionally as a proof of principle for ‘weapons grade’ power levels for high-energy lasers. In fact, many militarily useful effects can be achieved by laser weapons of 25kW or 50 kW, provided this energy is transmitted with good beam quality, as our system does. With this milestone, we have far exceeded those needs.”

Wildt continued, “Power scaling will be one of the game-changing features of high-energy lasers because it allows graduated responses by U.S. military services appropriate for whatever level of threat they may face. Threats vary, and so should the response.”

“Getting to 100 kW with replicated building blocks proves we can scale to these higher power levels if required for a given mission. This watershed development, coupled with our FIRESTRIKE(tm) laser ruggedization work, unequivocally demonstrates that Northrop Grumman is ready to bring high-power, solid state lasers to the defense of our deployed forces.”

For building blocks, the company utilizes “laser amplifier chains,” each producing approximately15kW of power in a high-quality beam. Seven laser chains were combined to produce a single beam of 105.5 kW. The seven-chain JHPSSL laser demonstrator ran for more than five minutes, achieved electro-optical efficiency of 19.3 percent, reaching full power in less than 0.6 seconds, all with beam quality of better than 3.0.

The laser already has been operated at above 100kW for a total duration of more than 85 minutes. A government team reviewed results of the demonstration during a System Test Data Review held Feb. 10 at Northrop Grumman’s Directed Energy Production Facility in Redondo Beach, Calif.

“It is notable that we were able to meet the power demonstration goal with only seven laser chains, rather than the full eight chains we can accommodate. This shows the robustness of our industry-unique approach and the ability of our lasers to deliver predicted performance,” Marmo emphasized. “Adding the eighth chain will increase laser power to 120kW.”