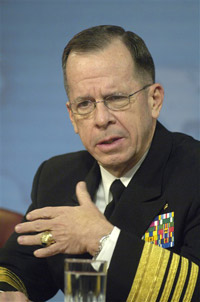 WASHINGTON, Jan. 24, 2008 – The Revolutionary Armed Forces of Colombia is a terrorist organization and should remain so, the chairman of the Joint Chiefs of Staff said during a Pentagon news conference today.

Navy Adm. Michael G. Mullen, who recently returned from a trip to Colombia, said he is concerned with Venezuelan President Hugo Chavez’s comments that the FARC, as the group is known, is a legitimate guerilla movement and that the nations of the world should stop treating the group as a terrorist organization.

The FARC is a narcoterrorist group that has killed thousands in Colombia and uses kidnapping and the drug trade as a way to fund itself. The group is still holding three American contractors captured in 2003.

FARC started in 1964 as a Marxist anti-government group. In the intervening years, it turned to drug trafficking. It has been years since the group had any ideological underpinning, State Department officials said.

The visit was Mullen’s first to Colombia. “I was taken aback with the progress that they’ve made to really return the Colombian country to its people,” he said. “They’ve had a significant impact on the FARC. The FARC is a declared terrorist organization and remains so.”

He said he was impressed by counterinsurgency tactics the Colombian government uses against FARC and other rebel groups. “There is concern with what Mr. Chavez is doing with respect to trying to have them recognized as a legitimate organization,” Mullen said.

Colombian President Alvaro Uribe told Mullen that “in his entire life … he has not seen a peaceful day and that (the FARC) has been a threat of great and continuing concern,” the chairman said.

The United States has worked closely with the country, Mullen said. Plan Colombia has helped the Colombian government and military train in counterinsurgency warfare and has had “a very, very positive impact.”

Colombia still needs help, the admiral said. They lose a soldier a day in fighting against the FARC, and more than 750 Colombian soldiers a year are wounded.

“We’ve got some areas we can continue to assist them in, with some really positive results,” Mullen said.

The admiral said there are lessons that can be learned from Colombia that may be transmitted to Afghanistan because both countries face narcoterrorists.

WASHINGTON, Jan. 24, 2008 - The Revolutionary Armed Forces of Colombia is a terrorist…