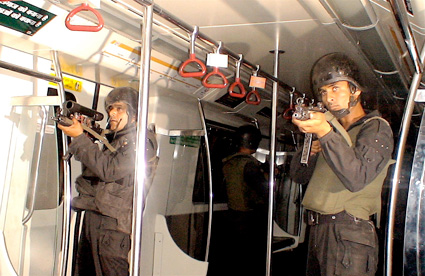 Just as the attacks of 9/11 painfully proved to America how vulnerable we were, so did the 26 November 2008 attacks on Mumbai drive home India’s vulnerability. The 10 terrorists carrying out the attack were not completely neutralized until 29 November, and in the process 164 civilians and Indian security operators died, with more than 300 injured. Nine of the 10 terrorists were eventually killed.

India’s security services failed to anticipate the attacks despite Mumbai having been a primary target for Islamic terrorists, especially those based in Kashmir. Hundreds have died in bombings over the last 15 years. Reportedly, U.S. intelligence warned India’s Intelligence Bureau of the likelihood of attacks in Mumbai and named some sites to be hit. India tightened security for a period, but by the time of the attacks had gone back to business as usual. 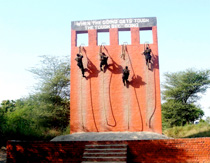 The terrorists arrived by sea from Karachi, Pakistan, aboard trawlers they had seized. Shortly after landing, the terrorists attacked the Colaba Police Station near their landing site. Police were primary targets, with 14 killed in the attack. Working in two-man teams, the terrorists used GPS and Google Earth satellite photos to locate targets. There are indications, too, they received some help on the ground with pre-attack recces and possibly the pre-positioning of additional weapons and explosives. Some took taxis to their objectives, while others used a captured police vehicle. Other taxis were blown up near the airport and docks to make it difficult for first responders to identify primary targets. Terrorists had taken cocaine and LSD to allow them to stay awake for days, and steroids to bulk up for the mission.

By attacking 10 targets throughout Mumbai, the terrorists diluted the police response and made it difficult to organize a hostage-rescue effort. Indications are that the terrorists did not consider the Mumbai attack a suicide mission and, hence, may have counted on the diversions to help them escape.

The Chhatrapati Shivaji Railroad Terminus was attacked first by two terrorists who sprayed the passenger area with AK-47 fire and grenades. The terrorists had trained for months prior to the attack and showed good two-man tactical skills, including one man loading while the other sustained fire. At least 10 people were killed. Anyone appearing to be a Westerner was targeted. After throwing grenades into the CCTV control room, the terrorists killed several police officers then headed for their secondary target, the Metro Cinema. However, responding police killed one and captured the other one.

Neutralizing the Defenders
Another early target was the Cama Hospital. Responding to reports of the hospital attack, Hemant Karkare, the commander of Mumbai’s anti-terrorist unit, was ambushed and killed along with key deputies. By decapitating the already cumbersome Mumbai “Anti-Terrorist Squad,” command and control was severely degraded.

The two hotels were major targets and by the time they were seized, the surviving terrorists from earlier attacks had joined the assault teams so that three terrorists hit each hotel and the Nariman House. At the Taj Mahal, terrorists reportedly seized 200 hostages. As they entered the hotel, terrorists hurled grenades and fired AKs in the lobby and later would detonate other explosive devices. Curtains were set aflame in many rooms to increase difficulty in locating terrorists and to create a haze around the hotel.

Many prominent persons were staying at the Taj, a Mumbai landmark, but the limited number of terrorists and the Taj’s 565 rooms allowed many guests to barricade themselves in rooms or escape. Fifteen of the Taj staff died helping lead hostages to safety.

Using Satphones, Blackberries, and wireless computers, the terrorists seem to have been in contact with handlers in Pakistan, reportedly including a high-ranking former member of Pakistan’s Inter-Service Intelligence agency. These handlers updated the terrorists from news reports and ordered them when to kill hostages.

Apparently, the plan at the Taj Mahal Palace was to inflict maximum casualties, then blow up the hotel and escape. The early engagement of the terrorists by MARCOS (Indian Naval Special Forces) operators from the nearby naval base seems to have forced them to make a stand.

The terrorists who seized the Oberoi Trident Hotel followed the same basic assault plan as they seized 35-40 hostages. When clearing rooms at the two hotels, it was once again apparent that the terrorists were well-trained as their entry tactics and fire discipline were good.

At Nariman House, gunfire and grenades were used to intimidate the hostages. Eventually, six hostages would die at Nariman House including a Rabbi and his wife. Israeli intelligence reports indicate, however, that they believe one or more of the hostages was killed during the Indian assault on the building rather than by terrorists. Certainly, the Israelis know better than most the difficulty in carrying out an assault without some danger to hostages. 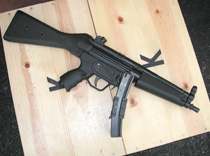 Poor Training, Worse Weapons
Unlike some large Indian cities, Mumbai does not have what we would term a S.W.A.T. team. The Anti-Terrorist Squad was armed with bolt action Lee-Enfield rifles and .32 or .38 caliber revolvers and was not trained in building assaults. Local police were even less well-armed and trained. India’s principal anti-terrorist unit is the NSG (National Security Guards), based at Delhi and numbering 7,500 or more. The NSG is divided into SAG (Special Assault Group) and SRG (Special Rangers Group). SAG provides the actual assault teams and the SRG containment units. SAG operators are organized into five-man “Hits” which break down into two, two-man teams and a tactical support specialist (breacher, etc.). Four “Hits” comprise a team commanded by a captain. SAG teams rotate through a two month alert cycle during which they are the primary responders against terrorist incidents. While on alert status, they fire 14,000 rounds in constant training. The immediate deployment team consists of 50-90 operators along with a transport aircraft on 30 minute “Go” status at Delhi’s Palam AFS. These would have been first to reach Mumbai, but they were 700 miles away.

As already mentioned, the first highly trained personnel on the scene were 12-15 MARCOS operators who defeated the terrorists at two locations and saved many hostages while holding out for 15-20 hours before the NSG arrived. They, along with the Taj employees who died saving hostages, were the real heroes of Mumbai.

Once on the scene, the NSG, eventually 200 strong, began assaulting targets. The Taj was cleared from the roof down. Although operators had master keys, the presence of hostages hiding in rooms, the fear of boobytraps, and fires burning throughout the hotel slowed clearing operations. Similar tactics were used at the Oberoi Trident.

The NSG plan at Nariman House was to fast rope operators onto the roof, while other operators cleared from the ground floor upward. Dual assaults of this type require excellent coordination to avoid a “Blue on Blue” shooting—actually in the case of the NSG, “Black on Black” since their black garb gives them the nickname “The Black Cats.” NSG operators cleared each floor, then seemed to hesitate for up to a half hour as they moved into position to clear the next floor. During the assault, NSG snipers fired into the fourth floor where they “thought” hostages and terrorists were located, but they do not appear to have verified targets!

Nariman House and the Oberei Trident were cleared by the morning of 27 November, but the Taj hotel was not finally cleared until 29 November. It had taken three days to root out nine terrorists.

Lessons To Learn
There were many problems with the Indian response at Mumbai. First, the ambush of the Anti-Terrorist Squad commander and key subordinates created command and control problems. Second, attacks on multiple targets would create problems in any city. Additionally, the lack of any trained unit in Mumbai, the world’s 6th largest city with a population of 19.5 million, is unforgivable. Given that there are at least 7,500 members of the NSG, it would seem logical to station detachments at India’s major cities to speed response. (Note: In  July 2009 India opened hubs in Mumbai and three other large Indian cities so that members of the NSG would be able to respond faster to a major incident) The size of the NSG raises some questions as well. Most major countries find it difficult to select and train an anti-terrorist unit of a couple hundred operators to the peak needed to carry out high-speed rescues. I find it hard to believe that the National Security Guards can be trained to that level with so many personnel. Even if only the 4,000 or so assigned to the Special Assault Group are trained to the top level as operators, that’s still a great number to select and train.

Various problems arose in the actual rescue operations. Reports from friends in Indian special ops units indicate that the NSG snipers did not perform well and/or their commanders were hesitant to use them. At various times, snipers had acquired one or more of the terrorists but do not seem to have had the “green light.” If this is correct, it probably cost lives since there were only three terrorists at each site; hence, each one eliminated would have speeded the clearing operation. The misuse of snipers combined with poor perimeter security was apparent during the lead-up to assaulting Nariman House. On an adjacent building, snipers and operators were intermixed with reporters and VIPs. Reportedly, NSG snipers were allowing the reporters and VIPs to use their scopes to gawk at what was going on at Nariman House!

Tentative, Tragic Response
Admittedly, clearing the hotels presented many problems, but there were still hostages to be rescued and the terrorists had shown willingness to kill and torture; therefore, there was no excuse for the clearing ops to have taken days. One of the delays seems to have been that NSG operators were having hotel employees sketch hotel floor plans. A national anti-terrorist unit with 7,500 personnel should have sent small teams to every major Indian potential target to video tape the building and develop a computer data base with architectural drawings from the fire brigade or city planning office. This is especially true of potential sites in Mumbai, a known terrorist target. National anti-terrorist units with a couple of hundred members manage to send recce teams to major government, commercial, and tourist buildings as well as overseas embassies. A unit with 7,500 personnel should manage to do the same. Force-on-force training using Simunitions should also have been arranged for members of the NSG to hone their clearing skills in typical buildings against targets that shoot back.

Operational security was very unprofessional as well: India’s Home Minister went on national television to announce the NSG had left New Delhi and how many were being sent. This information would have immediately been forwarded to the terrorists by their handlers. There were other problems, but these were the most dramatic. It’s easy to be critical after the fact, and our Monday-morning quarterbacking is in no way meant to demean the courage of the NSG operators or the members of MARCOS who risked their lives. The Mumbai tragedy is an opportunity for first responders and follow-up S.W.A.T./anti-terrorist units around the world to consider how they themselves could divide tasks should they face simultaneous incidents at many sites on their home turf. It turns out that even more sites in Mumbai were considered for attack during this atrocity, including the U.S. Consulate and the center of the financial district!!

Just as the attacks of 9/11 painfully proved to America how vulnerable we were,…