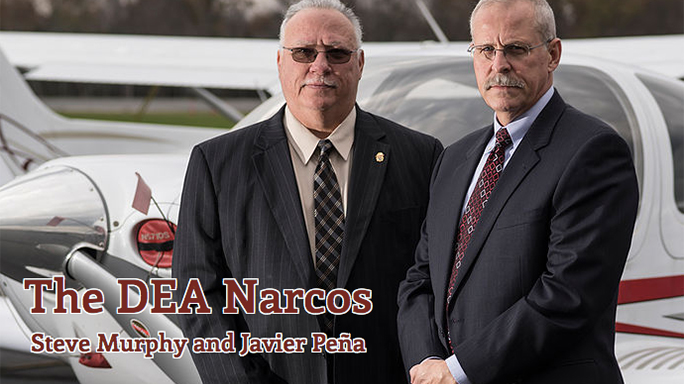 If you’re a fan of Narcos, the Netflix original series about the hunt for notorious Colombian drug kingpin Pablo Escobar, here’s your chance to meet Stephen E. Murphy and Javier F. Peña, the real-life DEA agents responsible for bringing him down.

Otis Technology has announced that Murphy and Peña will be signing autographs at the Otis booth number 5707 at the International Association of Chiefs of Police (IACP) conference on October 15-18 in San Diego, California, on Sunday from 10 am-1pm and Monday from 2pm-5pm.

More from the press release:

Murphy and Peña are the DEA agents responsible for taking down the Colombian drug lord Pablo Escobar in 1993. This was the dismantlement of the largest and most violent international drug trafficking organization of its time and many of the strategies and ideas created and implemented by Murphy and Pena are still used today by U.S. and international law enforcement.

Stephen started his career as a police officer and later joined the DEA as a Special Agent. He earned many promotions and leadership roles and retired in 2013 as the Special Agent in Charge/Director for the Department of Justice, OCDETF Fusion Center after 37 years in law enforcement.

Javier retired from the DEA as Special Agent in Charge in January 2014 after 30 years of service. One of the highlights in his career is his volunteer assignment to Bogota, Colombia in 1988 which later led to the take down of Escobar. He is a subject matter expert on the Medellin Cartel.

Both Stephen and Javier are recipients of multiple awards and honors throughout their law enforcement careers and now act as technical consultants for the Netflix series, NARCOS, which chronicles their time while in Bogota.

The new Trijicon MGRS is designed to withstand the jarring, rapid recoil produced by...