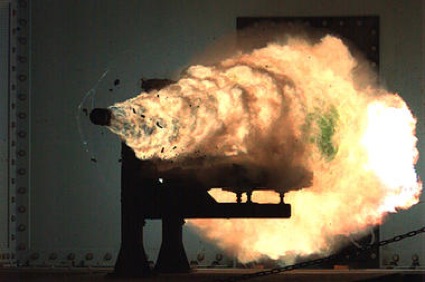 In 2008, the US Navy successfully tested its railgun, accelerating a slug to a record-setting 2520 meters per second. NASA is considering the same technology for launching payloads into orbit. Photo: Newscom/File

The idea for using a rail guns to launch objects to space has been around for years – even Isaac Newton considered the concept. But now a group of NASA engineers is seriously studying the possibility of using a rail gun as a potential launch system to the stars, and they are looking for a system that turns a host of existing cutting-edge technologies into the next giant leap spaceward. Stan Starr, branch chief of the Applied Physics Laboratory at Kennedy Space Center said that nothing in the design calls for brand-new technology to be developed, but counts on a number of existing technologies to be pushed forward. He said developing such a system would be a “major technology revolution.”

“All of these are technology components that have already been developed or studied,” he said. “We’re just proposing to mature these technologies to a useful level, well past the level they’ve already been taken.”

A rail gun utilizes a magnetic field powered by electricity to accelerate a projectile along a set of rails, similar to train rails. One early proposal from the NASA group calls for a wedge-shaped aircraft with scramjets to be launched horizontally on an electrified track or gas-powered sled. The aircraft would fly up to Mach 10, using the scramjets and wings to lift it to the upper reaches of the atmosphere where a small payload canister or capsule similar to a rocket’s second stage would fire off the back of the aircraft and into orbit. The aircraft would come back and land on a runway by the launch site.

Grandfather shoots 2 burglary suspects in self defense in Arizona City.

In 2008, the US Navy successfully tested its railgun, accelerating a slug to a…