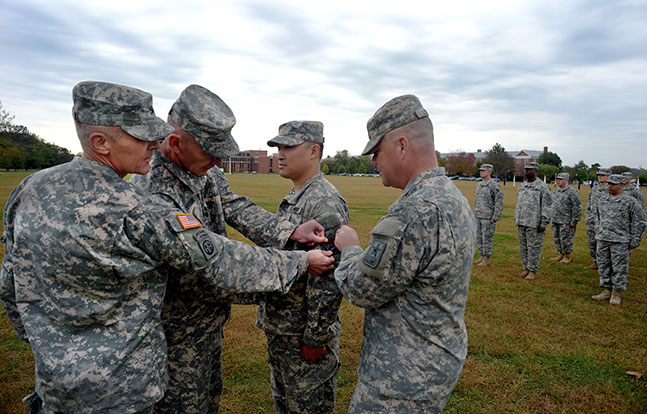 The following is a release from the National Guard:

For many, the ceremony represented something larger than the presentation of a uniform item.

“It’s symbolic of the integration of the reserve forces into the active forces in the common defense of our networks,” said Army Maj. Hung Diep, team chief of the 1636th CPT and an Iraq war veteran. “The team represents one of the most diverse forces that we have in the (Army) National Guard. We represent 19 states and two territories.”

Cardon cited the ceremony as a major milestone for Army cyberspace operations, Guard and Reserve forces and for the Army.

“It is another indication of the tremendous momentum that the Army is building to organize, train and equip its cyberspace operations forces,” Cardon said. “Army Cyber Command is taking a Total Force approach to building and employing the Army’s cyber force.”

The ceremony also represented a number of “firsts” for the Army.

Cardon cited the experience that Army Guard Soldiers bring with them from both the military and civilian sectors as being beneficial to the mission.

“They bring a wide range of experience, not only from serving in the Army National Guard, but also from working in industry, state government or other government agencies,” he said. “They are experienced, educated, and motivated.”

The team will be an invaluable part of the cyber force, said Cardon, adding that the teams will be responsible for conducting defensive cyberspace operations, readiness inspections and vulnerability assessments as well as a variety of other cyber roles and missions.

For Lyons, cyber operations tie into the Guard’s heritage and arethe next step forward in the Guard’shistory.

“Since 1636, the Army National Guard has been called upon to respond to floods, wildfires, storms and threats far from our shores,” he said. “The cyber threat is no less real, and it is absolutely in keeping with the finest traditions of the National Guard that Guard Soldiers will be fully integrated into the cyberspace force.”

The cyber threat, said Lyons, is synonymous with other key moments in history.

“In 1775 the “shot heard round the world” signaled the start of the American Revolutionary War,” he said. “Today, 239 years later, we face a world in which the first shots of the next war may be fired in cyberspace. And unlike the shots fired in 1775, those shots may indeed be heard around the world, in a very real sense, as systems and components thousands of miles away are instantaneously disabled by a keystroke.”

Protecting against that is critical.

“The billions of lines of code, massive server farms and cloud-based assets that govern our power, water, fuel, communications, transportation, and national defense must be protected,” Lyons said

The 1636th CPT is just one part of a larger force.

“Today’s ceremony may seem like a small step,” Lyons said. “The men and women here are relatively few in number compared to those who man our divisions, brigades and battalions. But they are true pioneers of the Army Guard…the vanguard of a larger force yet to be built.”

The team is just as important as those larger brigades and divisions.

“Their role is just as essential as that played by our combat units on the front line,” said Lyons. “They defend the nation on a different front – vigilant in ensuring our enemies never get the chance to fire the next… ‘shot heard round the world’ against our nation.” 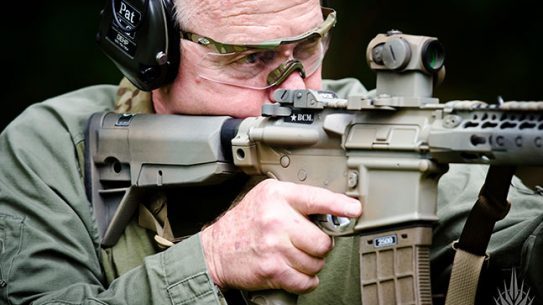 The all new Gunfighter Stock from Bravo Company is a strong, lightweight polymer stock...