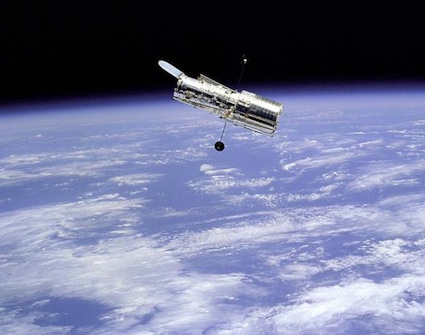 The two spy satellite telescopes were originally built to fly space-based surveillance missions for the National Reconnaissance Office (NRO), but will be repurposed by NASA for astronomical research instead. Their donation to NASA was revealed in a surprise announcement.

Both NRO space telescopes have a main mirror nearly 8 feet wide (2.4 meters), rivaling the Hubble Space Telescope, and also carry a secondary mirror to enhance image sharpness, according to press reports. NASA’s Hubble telescope is a veritable space icon that has been beaming stunning photos to Earth for 22 years.

NASA and NRO officials did not elaborate on the original design or mission for the reconnaissance telescopes, though officials told the Washington Post that the earliest either of the instruments could be recycled into a new space telescope and launched into orbit would be 2020. Finding the funding necessary to refit and launch the telescopes is a major hurdle, officials said.