The U.S. Navy’s Office of Naval Research (ONR) has unveiled a new video showing a test-fire of its years-in-development electromagnetic railgun. Check it out above.

The Navy describes the electromagnetic railgun as a long-range weapon that fires projectiles using electricity rather than chemical propellants. Magnetic fields from high electrical currents accelerate a sliding metal conductor between two rails to launch the projectiles at an insanely fast speed of 4,500 mph.

“[It] will give our adversaries a huge moment of pause to go: ‘Do I even want to go engage a naval ship?'” former Rear Admiral Matt Klunder, who was the ONR’s Chief of Naval Research, told Wired.com in 2014. “Because you are going to lose. You could throw anything at us, frankly, and the fact that we now can shoot a number of these rounds at a very affordable cost, it’s my opinion that they don’t win.”

It also has a “100+ nautical mile initial capability,” the Navy says. Basically, the electromagnetic railgun is not something to be trifled with.

“Frankly, we think it might be the right time for them to know what we’ve been doing behind closed doors in a Star Wars fashion,” Klunder added. “It’s now reality. It’s not science fiction. It’s real and you can look at it.”

Development of the Navy’s electromagnetic railgun, which was built by BAE Systems, began in 2005.

“The railgun is a true warfighter game changer. Wide-area coverage, exceptionally quick response and very deep magazines will extend the reach and lethality of ships armed with this technology,” the ONR website states.

According to Popular Mechanics, the electromagnetic railgun might be fitted on one of the Navy’s three Zumwalt-class destroyers. 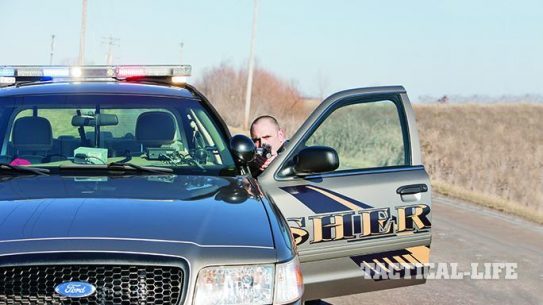 Forget the myths—these tactics will help protect you when you’re fired upon in your...